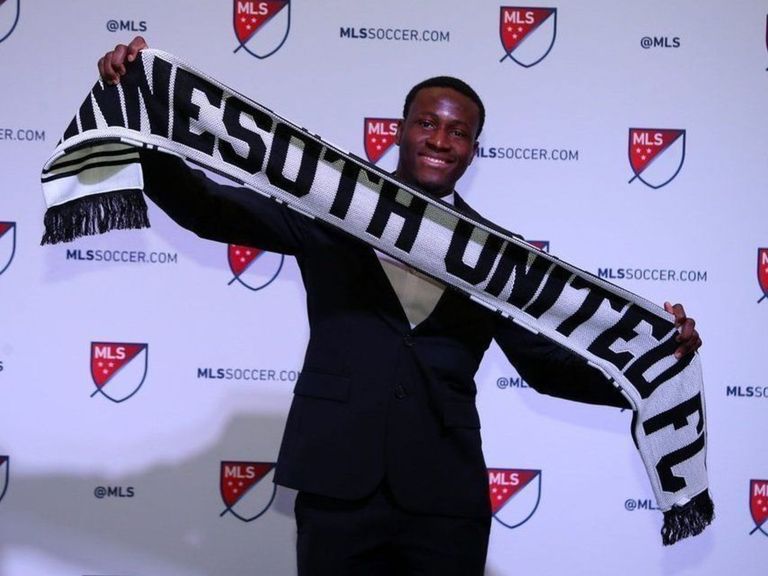 Minnesota United is the next stop on a great adventure for Abu Danladi, one that started 21 years ago in the coastal city of Takoradi in southern Ghana. Being drafted No. 1 overall brings heightened expectations, but it's just another obstacle for the former UCLA forward who's already overcome many.

As he and the Loons prepare for their inaugural MLS campaign, Danladi took some time to speak with theScore, reflecting on life in Ghana, the U.S., and the joys of playing the beautiful game.

From Ghana, with love

The city of Takoradi is divided between the rich and the poor.

Danladi grew up not in the nicer buildings in the city center, but in the outskirt villages next to an elementary school soccer field. As the older boys trained, wearing cleats he could not afford, he and the other young children played off to the side, dreaming of being noticed by a soccer academy.

Perhaps, one day, even the Ghana national team.

"I spent most of my time playing in those small games," Danladi told theScore. "People would be on the side betting on it, to put a little flavor on it.

"I knew I wanted to play the game on a different level. But I went through a lot of hard times.

"There are a lot of poor people in Ghana. My family is in that range as well. My dad was the one who was working but at some point he got married to a different wife and he wasn't taking care of us.

"Sometimes I went to school with no lunch money. I'd go to school hungry.

"I had to drop out of school for four months. My mom was working, so somebody had to sacrifice. I had to do that, to allow my younger sister and four older brothers to go to school. Even if it was hard for me, I had to do it.

"But when you play with all these kids, it's so competitive that you totally forget about being hungry; you're just in the moment, enjoying the game."

Danladi says Ghana is a place where "everybody wants to help you out" and it was the generosity of those who lived in similar circumstances that kept his soccer dream alive. When he was recruited by the Right to Dream Academy, he left home to move to California. It afforded him a great many opportunities.

But it also proved a different challenge.

Danladi discovered that life in the U.S. was quite different from life in Ghana. Religious divides seemed less important, but something else was missing.

"Ghana's a poor country, but if you go, you see everybody's happy," Danladi said. "Even the poor person is happy. He finds a way to be happy. Here, I didn't see that. Even in high school, a lot of the kids didn't feel happy all the time.

"How come the guys who don't have anything are really happy but these guys, when I came here, I was like, all these people have nice jobs and nice stuff and loved ones and still aren't happy?"

As he pondered his new life, Danladi found solace once more in soccer. He turned heads at UCLA, but noticed even on the field that things were different.

"A defensive mid in Ghana can do box-to-box work over 90 minutes and not get tired," Danladi explained. "Here, they don't do as much of the dirty work.

"Also, every single player in Ghana is fast. You have to be technical to go past the center-back, because he's fast. If you try to use your speed, he's fast too. The defenders here were not as fast as the defenders back in Ghana."

Danladi is one of 15 footballers from Ghana now playing in MLS. He can count Dominic Oduro, Gideon Baah, Joshua Yaro, Harrison Afful, David Accam, and Jonathan Mensah as opponents and calls Emmanuel Boateng his role model.

Among his challenges, Danladi has yet to face winter's cold. But he has embraced Minnesota immediately, partly because he was free to do so.

"It was a surprise. It was 100 percent a surprise to me," Danladi said of the draft. "I talked to Adrian (Heath) and he said 'We like you, but it's all up to you, if you want to be in Minnesota.

"I decided I wanted to play for Adrian. It doesn't matter what number, if Minnesota was 20th and they said they want to draft me then, I would have said, 'Yeah, I want to do that.

"In the end of the day, I knew it was a good decision and I wanted to be in Minnesota if they wanted me to be there. It was a big surprise to me when they called my name. It was a great feeling, but mixed feelings as well. And I'm really excited."