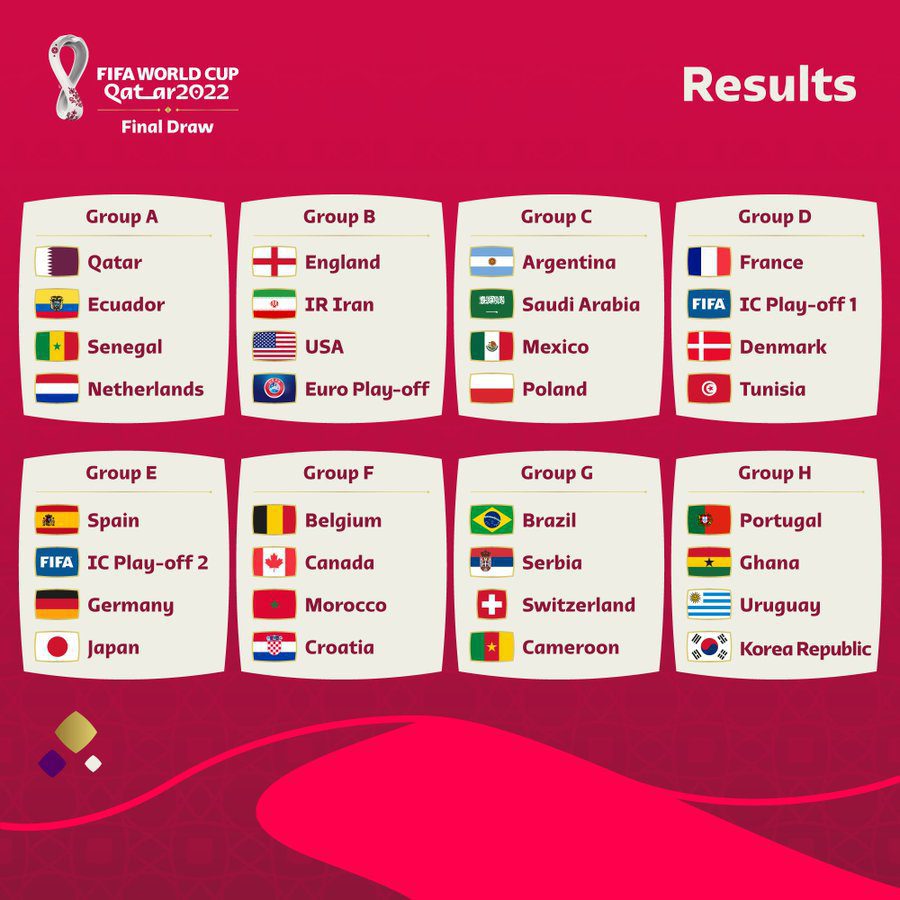 The draw has produced some great match-ups in the first two weeks of The Greatest Show on Earth.

Soccer fans around the globe, regardless of country, race, color or creed, are looking forward to the FIFA World Cup kicking off in Qatar on November 20. The four-year showcase of the world's most popular sport is sure to once more deliver moments of sporting brilliance, the ecstasy of victory and the heartbreak of defeat.

With 32 nations heading to the Emirate, The AllStar highlights 10 FIFA World Cup Group Stage Matches Not to Miss - not ranked, just listed in chronological order.

The Allstar has also previewed each of these matches in more depth, so download the app to read more and ensure you don't miss any team news in the build up to the biggest tournament in the world.

Before we get going, the folks at The AllStar have also taken a look at World Cup winners odds and the prospects of each team in the group stage, From Group A through Group H.

1. Senegal vs Netherlands, Group A

The Netherlands, undoubtedly have something to prove after a lacklustre run on the international stage in recent years. Indeed, they failed to qualify for the tournament in 2018, and in Euro 2020 went out in a 2-0 loss to the Czech Republic in the Round of 16.

If any further motivation is required, they might find it in a desire to perform for coach Louis van Gaal who earlier this year revealed he is fighting prostate cancer. A good run by the Dutch has the potential to become a Qatar 2022 feel-good story for a seasoned European stalwart of the game.

The Lions of Teranga qualified for Qatar after a penalties win over Egypt and Mane's former Liverpool teammate Mo Salah.

With both teams expected to qualify from Group A, this opener is likely to decide the top spot, and thus the better draw, going into the Round of 16.

Although there isn't a clear-cut Group of Death at Qatar 2022, Group C can make a legitimate claim.

With Argentina expected to top the group, and Saudi Arabia to bring up the rear, that leaves Poland and Mexico to duke it out for a place in the knock-out stages from the very off - which could make this a fascinating game.

Of course, Poland come equipped with the goal-scoring machine that is Robert Lewandowski, while Mexico have had their ups and downs getting here.

Despite losing only to Canada and finishing second behind them in CONCACAF qualifying, manager Tata Martino has faced calls for his dismissal after some lacklustre performances. A decent showing in Qatar ought to silence those voices.

The FIFA world-ranked #2 team won't expect a serious challenge by Canada, but are unlikely to take their opponents too lightly for fear of an embarrassing banana peel.

With powerhouse names such as De Bruyne, Hazard and Lukaku, Belgium will have hopes of going far in the competition, but Canada did well to beat both Mexico and the USA in their impressive qualifying run, finishing top of the CONCACAF group.

Canada are at their first World Cup finals in 36 years. With Croatia and Morocco also in Group F, it seems unlikely they'll advance beyond the group stage, but that doesn't mean they won't be out to make a name for themselves - and maybe even snatch a surprise win somewhere on the game's biggest stage.

Everyone will want to watch the custodians of the beautiful game - and tournament favorites - open their campaign, especially after their dominant CONMEBOL qualifying campaign. Can Neymar finally deliver in a World Cup?

If we're still looking for potential banana skins, Brazil can't afford a sleepy start. This Serbia team drew with Portugal to beat them to automatic qualification (albeit in controversial style, with a seeming Ronaldo goal going unrecognised).

If sport has shown us anything - and as Qatar 2022 looks for its stories to unfold - we know a minnow with little to lose, pitted against the best in the world, can prove a testing and tasty scenario.

With the popularity of soccer in the US ever growing, and the MLS going from strength to strength, this could be the most-watched USMNT performance in history. And against England no less, who have actually struggled against the USA, failing to win their last two World Cup meetings.

The US famously pulled off one of the biggest upsets in the history of the game by beating England in the 1950 World Cup.

Harry Kane will no doubt be looking to open his Golden Boot account, and expect the tabloids to be all over this match in the run up to this World Cup group stage clash. England, having lost to Croatia in the semi-finals in 2018, will once again be dreaming (and singing about) football coming home

With Lionel Messi leading the Albicelestes most likely for the last time in a World Cup, Argentina will be looking for a strong showing.

Mexico's approach to the game will be shaped by the result of their earlier tie against Poland. A win, and they'll likely be happy to take second in the group; a loss, and with little to lose as underdogs there's no reason to hold back - which could make for a treat of a game.

Plus, Mexico would love to settle past scores. Argentina have put them out in all of their three World Cup meetings - in extra-time in 2006 and as victims to a controversial Carlos Tevez goal in 2010. Mexico have never failed to move on from the group stage in a tournament for which they've qualified since 1978... in Argentina.

The second group stage match, but the first real test for the defending champions.

Les Blues are fully expected to take the group, but Denmark will be looking to build on their showing in Euro 2020, where they lost 2-1 to England in the semi-finals. The Danes managed to hold France to a goalless draw in the group stage four years ago.

Then there's the narrative around Christian Eriksen's miraculous return. After suffering a cardiac arrest on the pitch in Euro 2020 against Finland, Eriksen technically died for five minutes. His survival was enough of a gift, let alone a return to professional sport. Yet here he is, back playing for his EPL team Brentford and now Denmark at Qatar 2022.

This has the potential to be the game of the World Cup group stage. Germany, who lifted the trophy in 2014 after beating Argentina in Brazil, are ranked #12. Under Hansi Flick, they're ready to reclaim their place in the higher echelons of international football after failing to make it out of the group stage in 2018.

Spain, champions in 2010 over the Netherlands in South Africa, are ranked #7 and have been rebuilding under the popular Luis Enrique.

La Roja no doubt have a point to prove also.

Group H could also prove tricky to navigate, consisting of Portugal, Uruguay, South Korea and Ghana. In the openers, Portugal have Ghana and Uruguay have South Korea - where wins for the favorites aren't easy guarantees.

The second round of group matches pits what should be a strong Portugal squad with the likes of Bruno Fernandes, Joao Cancelo, Pepe and Rubian Dias alongside Cristiano Ronaldo, while Uruguay can boast Edinson Cavani and Fede Valverde alongside Luis Suarez.

And let's not forget, it was Uruguay - and a Cavani double - that put Portugal out in the Round of 16 in Russia 2018.

However, expect the focus to be on the clash between Cristiano Ronaldo and Luis Suarez, both looking to shine in their final World Cup campaign.

Messi vs Lewandowski. 2021 Ballon D'Or winner vs runner-up. A face-off to get any soccer fan salivating. This could be the decider to see who tops Group C, and with these two on the pitch, fans will be holding out for a high-scoring belter.

Assuming Group D goes to script, the difference they'll be playing for is whether they meet defending champions France or Denmark in the next round. Buckle up.