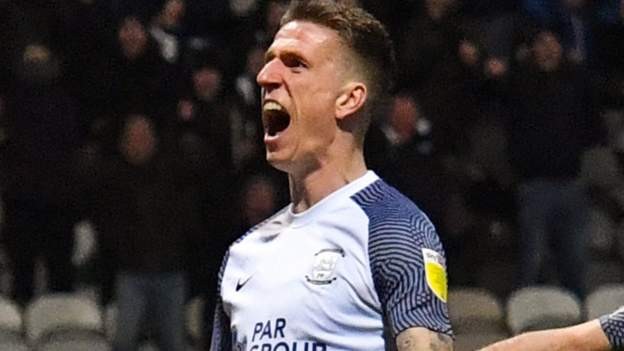 Jayden Bogle gave the Blades an early lead with a low shot through a crowded penalty area after John Egan's header from a corner had been beaten away by Daniel Iversen.

The Blades doubled the lead through a Billy Sharp penalty after Andrew Hughes was controversially sent off for a foul on Rhian Brewster.

Alan Browne pulled a goal back from close range before Riis popped up at the far post to slot in Ched Evans' cross.

Despite dropping two points, Sheffield United move up to 11th and into the top half of the table on 33 points, ahead of 13th-placed Preston on goal difference.

Preston should have gone ahead after 12 minutes when Riis broke through and fed the recalled Scott Sinclair, but the winger blasted against the legs of Wes Foderingham.

The Blades broke immediately from Foderingham's save as Iliman Ndiaye forced Iversen to push his low shot past the far post, and it was not long before Bogle put the visitors ahead with an effort that beat the unsighted Preston keeper.

Billy Sharp scored his 121st Championship goal to equal the record since the second tier was rebranded in 2004 - his first came for Sheffield United 5,061 days ago

The visitors began to up the pressure, but Preston coped well until conceding what appeared to be a soft penalty.

Bogle's pass was flicked to Brewster by Sharp and the former Liverpool forward broke through before going down under a tangle of legs with Hughes. Referee David Webb pointed to the spot and sent the defender off for denying a goal scoring opportunity.

Sharp's penalty saw the 35-year-old equal former Preston forward David Nugent's record of 121 goals in the Championship since the second tier was renamed in 2004. The striker got his first at this level in March 2008 in a 2-1 win over Coventry City.

Iversen made a good save from Ndiaye soon after the restart before Foderingham made an even better one two minutes later when he tipped over Browne's header.

Brewster should have had the game out of sight after missing three good chances in the opening 20 minutes of the second half - his third saw the club's record signing drag a shot inches wide of the far post from six yards out.

Daniel Johnson and Riis had chances in quick succession before Browne's powerful side-footed finish got Preston back into it after Johnson had cut the ball back.

And those earlier misses came back to haunt Paul Heckingbottom's side as Riis sealed the win before Sepp van den Berg did well to block a stoppage-time effort from United's Conor Hourihane.

Alan Browne (Preston North End) wins a free kick in the defensive half.