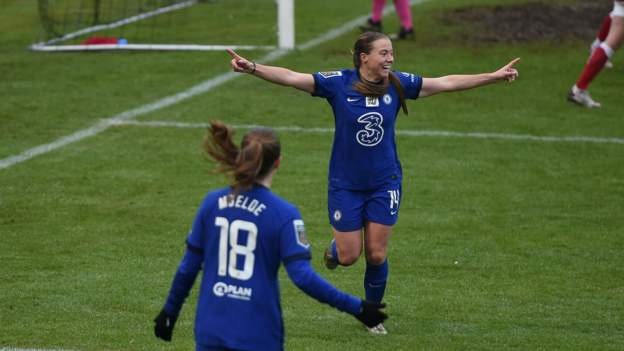 The 10th anniversary of the Women's Super League is a "source of pride" for the FA, which will open a Hall of Fame to mark the occasion.

Tuesday marks a decade since the league was launched, when Arsenal beat Chelsea 1-0 in the top-flight's first match.

Since then, there have been four champions, with Arsenal and Chelsea both winning the league three times.

"It should be a source of pride of where we have got to and for everybody who has made it happen," she told BBC Sport.

"Since the Women's World Cup particularly, the development of the WSL has absolutely turbo-charged.

"We saw record attendances pre-Covid and we can't wait to have fans back next season to continue to build on the great work done by the clubs to really embrace and engage fans to get them through.

"Without doubt, we have seen the quality of the product grow hugely and it has been able to attract some of the best players in the world alongside our best English talent. It has made it fantastic to watch and fantastic for those fans."

A Hall of Fame will be opened to recognise the "significant contributions" made during the last 10 years.

"It is a chance for us to showcase the players, managers and officials who have made outstanding contributions in terms of the WSL," said Simmons.

"We will be appointing an expert panel which I will chair. We will get the experts around the table and will make an announcement on the first inductees before the next season kicks off.

"We thought it was a great moment with it being the 10-year birthday to look back, recognise and thank the tremendous work of some of the people who have made this journey happen."

In March, it was announced the BBC will show the Women's Super League on network free-to-air TV for the first time in a "landmark" three-year broadcast deal.

From next season, WSL games will be shown live across the BBC and Sky in the deal worth £7m-£8m per season.

Simmons admitted that brought with it "nice problems to have", including improving the quality of pitches to ensure they are "broadcast ready".

She also said the league was looking to address the standard of refereeing in women's football, which has come under increasing scrutiny as the quality and profile of the game has improved.

"We've got an announcement, probably in the next week or so on that around an uplift in that area," she said.

"We know that with a new investment coming in that we've got to make sure that we invest in that area as well which I think probably hasn't received the levels of investment over the years as maybe some of the other areas like coaching and the league performance service, so we're going to invest in that area too."