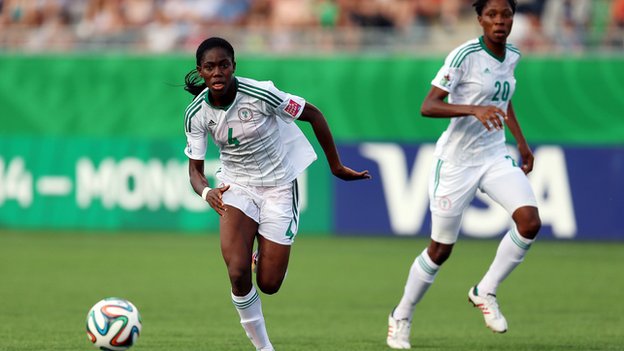 Nigeria, Ghana and Cameroon are favourites as the African Women Championship kicks-off in Namibia on Saturday.

The championship is scheduled for 11-25 October 2014 in two stadiums [The Independence stadium and the Sam Nujoma Stadium] in Windhoek.

It will also serve as qualification for the Fifa Women's World Cup to be held in Canada from 6 June to 5 July, 2015.

The top three nations from the two-week long event will represent Africa in Canada.

Names like Super Falcons, Black Queens and Indomitable Lionesses should intimidate the other five nations competing at the finals.

But the Brave Gladiators, Banyana Banyana, Chipolopolo Queens, Les ElÃ©phantes and Les Fennecs Dames will be hoping to gate-crash the Canadian party.

Continental powerhouseÂ Nigeria's Super FalconsÂ will beÂ seeking redemptionÂ in Windhoek after they finished fourth in the last edition, their worst result in the history of tournament.

The most successful team in the competition, with six titles, Nigeria only failed to win in 2008 and 2012, losing their title to hosts Equatorial Guinea on both occasions.

The Super Falcons are expected to safely fly out of the group consisting of apparent lightweights in debutants Zambia and Namibia.

This time around Nigeria's squad has a blend of experienced campaigners and talented youngsters.

Veterans Perpetua Nkwocha, Stella Mbachu and Onome Ebi, will play alongside Ugochi Njoku and Asisat Oshoala, who both helped Nigeria reach the final of the 2014 U-20 Women's World Cup in Canada in August.

"We are not under-rating any team but we have the right mix of players to prove to everyone that we are still the giants of Africa," Oshoala, top scorer and Most Valuable Player at the Fifa U-20 Women's World Cup, told BBC Sport.

Debutants and hostsÂ Brave Gladiators of NamibiaÂ will be counting on home support to help them navigate their route out of this group.

Ranked 113th in the world, coach Jacqueline Shipanga will be seeking inspiration from defender Stacey Naris and striker Thomalina Adams.

Ivory Coast,Â who crashed out in the first round at their maiden appearance in 2012, will draw inspiration from their emphatic qualification as they aim to reach the semi-finals.

After managing a 1-1 draw at home in the first-leg, they forced the two-time champions to a 2-2 draw away, to book a place in Namibia on away goals rule after the tie ended 3-3 on aggregate.

Coach Clementine Toure is confident she has the squad to make an impact and prove that their giant-killing act was no fluke.

After edging Tanzania and Zimbabwe to book their place in the tournament proper,Â Zambia's Chipolopolo QueensÂ have hopes in Hellen Mubanga and Kabange Mupopo to help steer them beyond a predicted doom.

hana's Black QueensÂ are hoping to make a bold statement on their return to the championship.

Three-time runners up, third place winners twice, Ghana failed to come out of their group in 2008 and 2010 before failing to qualify for the 2012 tournament to underline a disappointing slump.

The perennial underachievers are drawn alongside experienced campaigners South Africa and Cameroon.

They will need Faiza Ibrahim, Samira Suleiman, Elizabeth Cudjoe and Mercy Myles to be at their best if they are to make it to the World Cup like they did in 1999, 2003 and 2007.

Regular campaignersÂ South AfricaÂ are still looking for their first trophy after finishing runner-up thrice in 2000, 2008 and 2012.

Coach Vera Pauw and Banyana Banyana aim to create history by qualifying for their maiden Women's World Cup, and they have two stars that could turn that dream into reality.

"I think we are looking sharp and looking good for this tournament. I'm confident of my team. I trust my team-mates, " Nyandeni said.

"I would be very happy to qualify, having already been to the Olympics.

"It is exciting, and our dream is to play in the World Cup. If we qualify we hope that many doors will be opened up for players to play overseas."

Ever-presentÂ CameroonÂ - they have never missed an edition of the AWC since 1998 - are desperate to claw their way to Canada.

The Indomitable Lionesses are planning to roar into history by playing at the World Cup and follow in the footsteps of their male counterparts.

If they can finish in third place in Namibia, a feat they achieved in 2002 and 2012, then it will be good enough to land them in North America next year.

"We have shown consistency playing at the AWC, now is the time to do it on the world stage," Coach Carl Enow Ngachu said.

Spare a thought for makeweightsÂ Les Fennecs Dames of AlgeriaÂ as they embark on a mission impossible.

In three previous appearances they failed to survive the group stage. They will open their campaign against Ghana before facing Cameroon and South Africa.

They carry the hopes of North Africa and coach Azzedine Chih will be hoping they don't crumble under the weight of expectations.