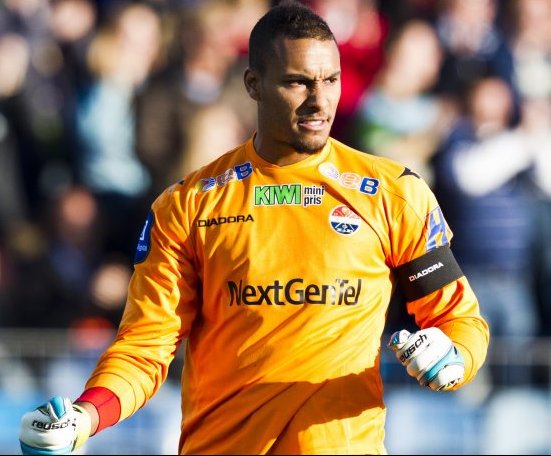 Ghana goalkeeper Adam Kwarasey has confirmed he will be rejoining his club Stromsgodset for their crunch league match against Rosenborg on Saturday.

The 26-year-old is badly needed at his club for their league match and will therefore leave the Black Starsâ€™ preparations momentarily to help his side.

Stromsgodset lost 2-1 at Stabaek on Tuesday in the absence of their inspirational captain while substitute goalkeeper Anders Gundersen was in post.

But manager Ronny Deila is unwilling to take any chances this weekend when the champions host Rosenborg in the big game in the Norwegian top flight.

The club have thus struck an agreement with the Ghana FA to have their inspirational goalkeeper return for Saturdayâ€™s clash.

Kwarasey has now confirmed to Ghanaâ€™s number one football news outlet that he will respond to the emergency call to return to his club for Saturdayâ€™s clash at the Marienlyst Stadion.

â€œYes I will go tomorrow [Friday] night,â€ Kwarasey told GHANAsoccernet.com at the state dinner for the Black Stars on Thursday night.

This means Kwarasey will not be part of Ghanaâ€™s travelling party from Accra for their training camp in the Netherlands on Saturday.

He will however be involved in the farewell match against a locally select side earlier on Friday before catching his flight to Norway in the night.

The Stromsgodset captain is however expected to rejoin the Black Stars camp in the Netherlands by Sunday when other absentees Michael Essien and Kevin-Prince Boateng are also expected to arrive.