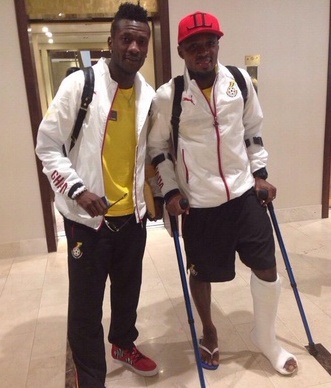 Ghana defender Jerry Akaminko was assessed by doctors in Miami on Wednesday afternoon ahead of his expected surgery to fix an ankle injury which ruled him out of the 2014 World Cup.

The Turkish-based defender is likely to be admitted at a hospital in the USA on Thursday before a definite date and time is set for his operation.

Akaminko suffered the ankle injury in the dying minutes of Ghanaâ€™s 1-0 defeat to the Netherlands in an international friendly last weekend.

He was later hit with the news that he couldnâ€™t make the final Black Stars squad for this monthâ€™s tournament in Brazil as his injury will take at least three-months to fully heal.

The 26-year-old is expected to be operated on in the coming days to allow him kick-start his rehabilitation routine.

He is currently the Black Stars team in Miami as the rest of his international teammates finalize their preparations for the World Cup in Brazil.

Ghana will play Korea Republic in their final warm up match on June 9 before leaving for their camping base in Brazil two days later.

The Black Stars are making a third successive appearance at the World Cup but are drawn in a tough group alongside Germany, Portugal and the USA.