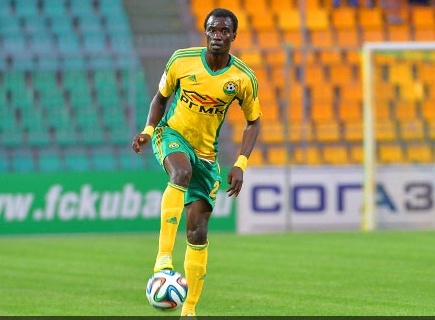 Ghana midfielder Rabiu Mohammed hopes to have broken his goalscoring duct after grabbing his first goal for Kuban Krasnodar on Saturday.

The 24-year-old defensive midfielder scored the final in Kubanâ€™s 4-0 drubbing of Kraylya Sovetov.

Rabiu has just come off an extensive spell on the sidelines with injury which has limited him to just eight league appearances this term.

The former Evian TG man now hopes to have turned a new leaf in his unimpressive goalscoring record.

â€œThank God that he gave me the opportunity to score that goal,â€ he said with excitement.

â€œAfter an injury it was hard to recover, but finally I came to the game in optimal condition and hopefully will score more.â€

Rabiu is expected to be named in Ghanaâ€™s squad for the 2014 World Cup having missed the crucial playoff against Egypt due to injury.