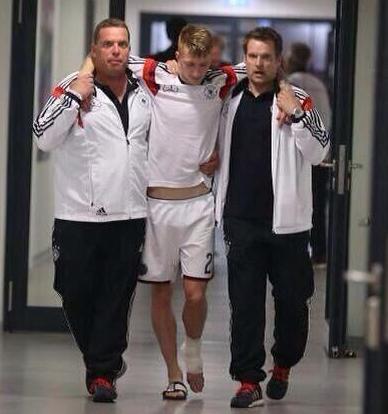 Germany are expected to be without star man Marco Reus for the 2014 World Cup following news he has suffered an ankle injury in their 6-1 thrashing of Armenia on Friday.

The Borussia Dortmund midfielder was carried off the field crying on the stroke of half time having stayed down after a challenge in the friendly win.

Further tests having been rushed to a nearby hospital revealed he has suffered a ligament tear in his left ankle which is likely to see him miss the World Cup for Germany with confirmation yet to come from the DFB.

Reus has evolved to be a key man for the under pressure Joachim Low whose team have several fitness issues especially to their influential players ahead of the World Cup in Brazil.

Germany will be facing Portugal, USA and Ghana in Group G of the 2014 World Cup in Brazil.