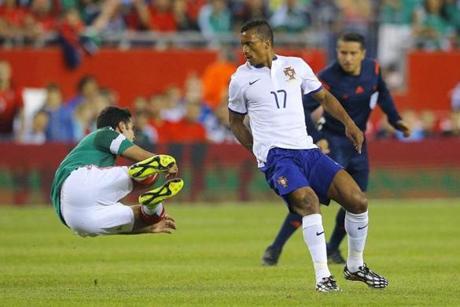 Nani lasted the full duration of the game
Share

An injury time strike by defender Bruno Alves handed Portugal a 1-0 win in an international friendly over Mexico without their inspirational captain Cristiano Ronaldo.

The Real Madrid star remains out as he struggles to regain fitness from knee and muscle problems.

Paulo Bentoâ€™s side once more again failed to glitter against Mexico who will also be competing at the World Cup in Brazil.

The highly physical game saw three of Portugalâ€™s back four get booked as against the two of Mexico.

Bento played all his big names with the exception of injured Cristiano Ronaldo and striker Hugo Almeida.

Fabio Contrao, Nani, Miguel Veloso and Joao Moutinho were all in action but they failed to glitter against the Mexicans in the games played at the Gillette Stadium in Massachusetts.

They will now go on to face the Republic of Ireland in their final warm up match on Wednesday before heading to Brazil for their Group G opener against Germany on June 16.

The Selecao will then face the USA and then Ghana to wrap up their group campaign.