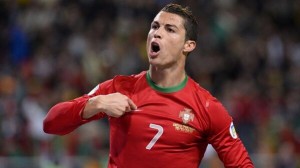 Cristiano Ronaldo has rubbished claims of a Ghanaian witch doctor that theÂ Portugal superstarÂ won't be able to play at the World Cup by returning with his side ahead of the tournament in Brazil.

Ronaldo resumed training with the Portugal squad on Saturday after recovering from leg injuries that threatened to sideline him from their World Cup opener against Germany.

Kweku Bonsam had claimed that he had jinxed Ronaldo to prevent him from playing against Ghana when the two sides meet in Group G of the World Cup this month.

The Portuguese Football Federation said in a statement on its website that the forward was joined by central midfielder Raul Meireles, who had also recovered from injury.

Ronaldo has been suffering from tendinitis and a muscle injury, both in his left leg.

Portugal plays Germany in nine days, but will also play Ireland in a friendly on Tuesday at New Jersey's MetLife Stadium before departing for Brazil.

At the World Cup, Portugal also plays the United States and Ghana in Group G.

The federation also said goalkeeper Beto was receiving treatment for an unspecified problem.