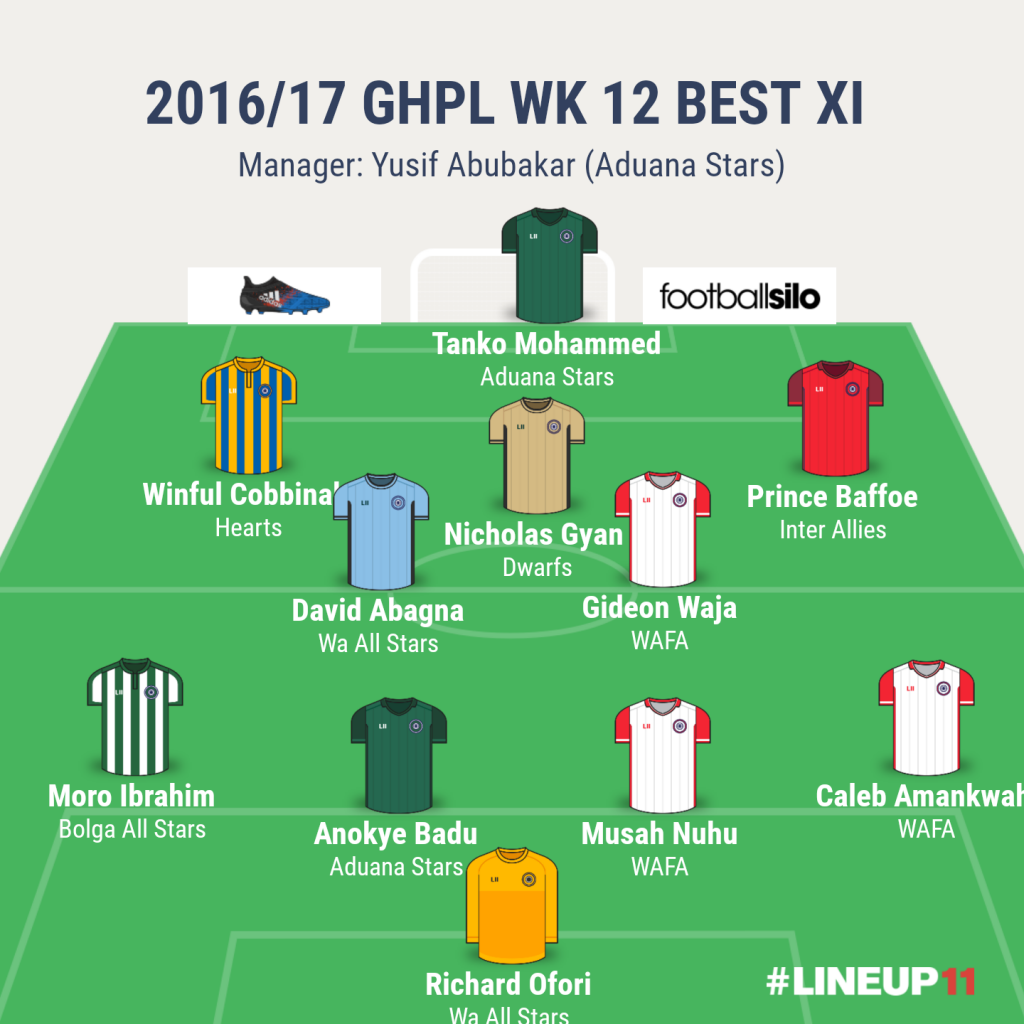 Winful Cobbinah's expertly taken free kick restored parity at the Accra Sports Stadium to secure a point for Hearts in the hands of troublesome Elmina Sharks. The Beckham-like free kick forced all from their seats as Sharks goalie Attah Richard could only struggle to be on his feet. Richard Ofori demonstrated a masterclass of goalkeeping, saving Wa All Stars from the troubles of Asante Kotoko to secure a solitary win over The Reds while Gideon Waja led his WAFA side to lash Bolga All Stars by 2-0.

Coach Yusif Abubakar emerged the coach of the week after masterminding a 3-0 onslaught of Tema Youth at the Nana Agyeman Badu I Park.

1. Richard Ofori (GK) - Wa All Stars: Ofori returned from his trip to South Africa to deepen the woes of the ailing Porcupine Warriors. He saved Abeiku Ainooson's penalty to add up to over six saves he had made earlier. Ofori stood between Kotoko and goal. His experience was brought to bear and he got his side all the three points.

2. Caleb Amankwah - WAFA: Caleb was at his best for WAFA in their clash against Bolga All Stars. He fetched the opener for WAFA before Waja increased the tally to keep their title hopes alive. His primary role of defending was excellently done as he kept out Noah Neequaye out of the game. He supported attack when necessary and defended aptly.

3. Moro Ibrahim - Bolga All Stars: Despite struggling to find their feet against WAFA, Moro stood out of the Bolga All Stars side. He was phenomenal with his crossing, spot on with his tackles and defended very well.

4. Musah Nuhu - WAFA: Musah is gradually becoming a consistent name in the Best XI of the week as he has been consistent in the last four outings. He was the rock Bolga All Stars needed to break to get a goal from the Red Bull Arena but struggled to do that. Nuhu was excellent in the air, accurate with his long passes, swept in a marvelous way and apt with his tackles.

5. Stephen Anokye Badu - Aduana Stars: Michael Kporvi and Joseph Paintsil needed Anokye Badu out of the Aduana Stars defence to be able to score. He was too strong a pillar at the back for the contenders and aggressive as well.

6. David Abagna - Wa All Stars: While Ofori was stopping Kotoko from scoring, Abagna was masterminding a strategy to defeat the Reds. He was phenomenal in midfield for All Stars, neutralised the trio of Jackson Owusu, Prince Acquah and Michael Akuffo. He was strong on the ball, intelligent off the ball, accurate with his passes and apt with his tackles. He was voted player of the game.

7. Prince Baffoe - Inter Allies: Baffoe did not only score for Allies to pip AshGold but also made history as his goal was the 100th goal for the Tema-based side since they joined the Premier League. Despite that, he was a thorn in the flesh of AshGold. He eventually emerged the man of the match.

8. Gideon Waja - WAFA: Not just a captain but a leader. His dazzling free kick will match any of Beckham's on any day. A goal of the season contender, Waja forced the cat-like Abdul Aziz Suleman to remain in a static position as the ball kissed the net.

9. Tanko Mohammed - Aduana Stars: Tanko played the game of his life against Tema Youth on Sunday, won MVP and scored a fabulous goal to the admiration of all.

10. Nicholas Gyan -Dwarfs: Gyan kept his goal scoring up by scoring the only goal for his side as they pipped Berekum Chelsea at the Cape Coast Sports Stadium. He topped his bravura performance by emerging the player of the match.

11. Winful Cobbinah - Hearts of Oak: Cobbinah justified why Hearts fans must cry for him to start playing. His superlative performance and outstanding display of masterly skills was simply applaudable. His well-taken free kick will contest Waja's for the goal of the season. He secured a point for Hearts by restoring parity and emerged the man of the match.