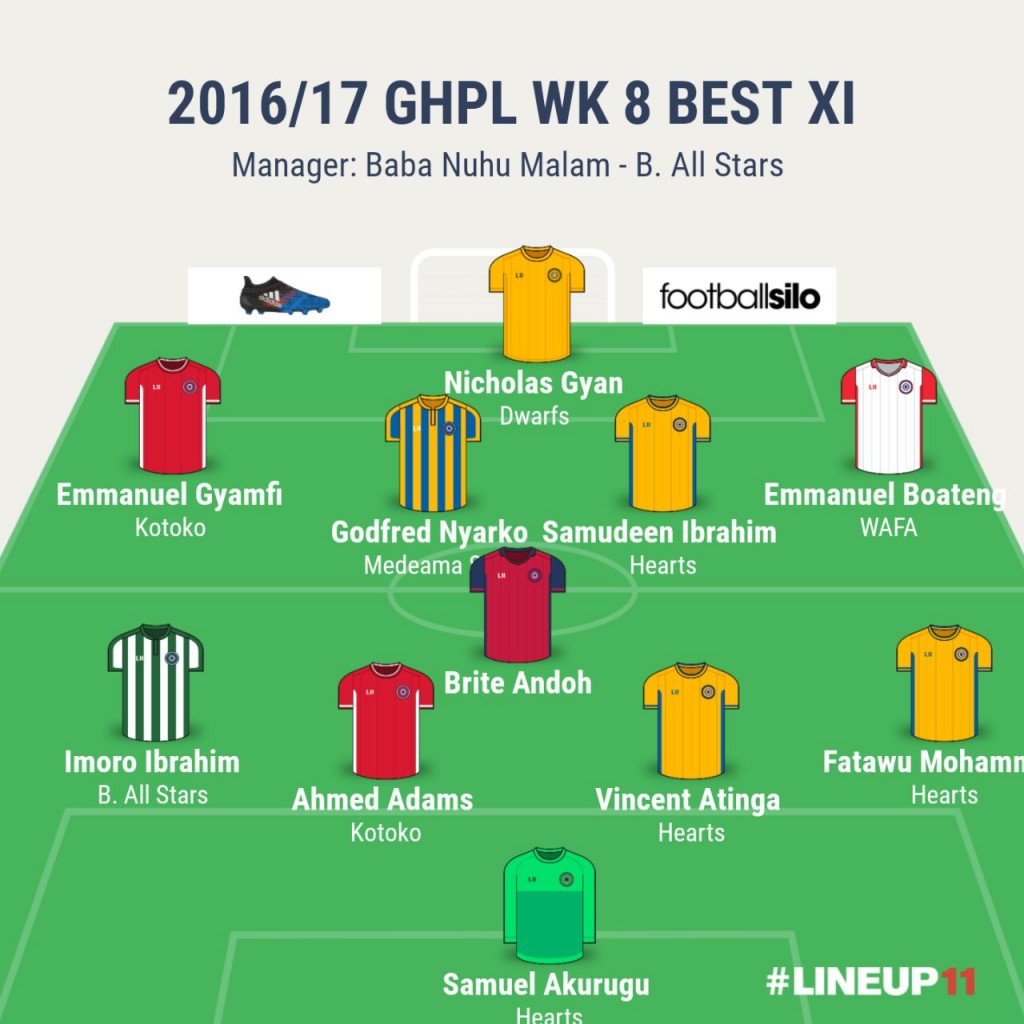 The Ghana Premier League hit the eighth week with magnificent performances from many players but Vincent Atinga stole the show, dominated the headlines and won many Phobian hearts as he did not only expertly convert spot kick to end Hearts’ winless run against Kotoko since 2009, but also fought like a warrior.

Emmanuel Gyamfi was the brightest spot for Kotoko in the Super Clash as he displayed mouthwatering skills while Nicholas Gyan continued his scoring form for Dwarfs with Samudeen Ibrahim maintaining his brilliant display for the Phobians.

Bolga All Stars trainer Baba Nuhu Malam emerged the coach of the week for masterminding his side’s 2-1 win over in-form Bechem United with 4:14:1 maintained as the system of the week.

Samuel Akurugu (GK) – Hearts: Surprisingly, Akurugu was seen in post against archrivals Asante Kotoko instead of the in-form and consistent Benjamin Mensah. And he proved his mettle by pulling some great saves. One of such saves was a mind-boggling first half save when he was almost down on the ground. That save obviously won him the goalie of the week.

Fatawu Mohammed – Hearts: He was relatively quiet in the game but had a good day against Kotoko. He made more than four excellent crosses and defended well. His initial cross nearly gave the Phobians the opener.

Imoro Ibrahim – Bolga All Stars: The Bolga All Stars left back is making it into the team of the week for the third time. That surely speaks volumes of the kind of player he is. Very intelligent in attack and clever in defence. He provided an assist and emerged the player of the match as well.

Ahmed Adams – Kotoko: The Kotoko center back had a great game until the center referee Samuel Sukah made him the sacrificial lamb of the game. He was outstanding in the Kotoko defence and excellently executed his duty.

Vincent Atinga – Hearts: Many felt he should have been adjudged the player of the match. He fetched the winner for Hearts and the master of the Hearts defence. He kept a close eye of Yakubu Mohammed and played him out of the game on numerous occasions. His aerial duels were marvelous.

Brite Andoh – Liberty: Virtually unknown in the GHPL but is obviously one of the greatest talents of Liberty Professionals. Brite emerged the player of the match and his industrious display confirmed the choice.

Emmanuel Gyamfi – Kotoko: Asante Kotoko’s winger was surely the pivot of the Red team. He was excellent with his runs on the wings, displayed incredible skills and demonstrated intelligence on the ball. He was simply amazing in the game.

Samudeen Ibrahim – Hearts: For the second time in succession, Samudeen has made it into the best eleven of the week. He was the main pivot of the Hearts of Oak midfield. His passes were on point and ball distribution, apt.

Godfred Nyarko – Medeama: By the time the game ended goalless with Olympics, it was clear who the player of the match was. Nyarko had a great game against the ailing side. He showed maturity in his play and manned the Medeama attack to perfection.

Nicholas Gyan – Dwarfs: He scored his 6th goal of the season to hand Aduana Stars their first defeat of the season. The in-form striker did not only score, but also ensured his side won by creating a second. He leads the goal king race so far.

Emmanuel Boateng – WAFA: Winning the man of the match in a game WAFA had to rely on defensive blunders to win is a definition of intelligence on the side of Boateng. He was smart and demonstrated high sense of excellence in his play. He scored the opener for WAFA before Komlan Abegniedan added the second.