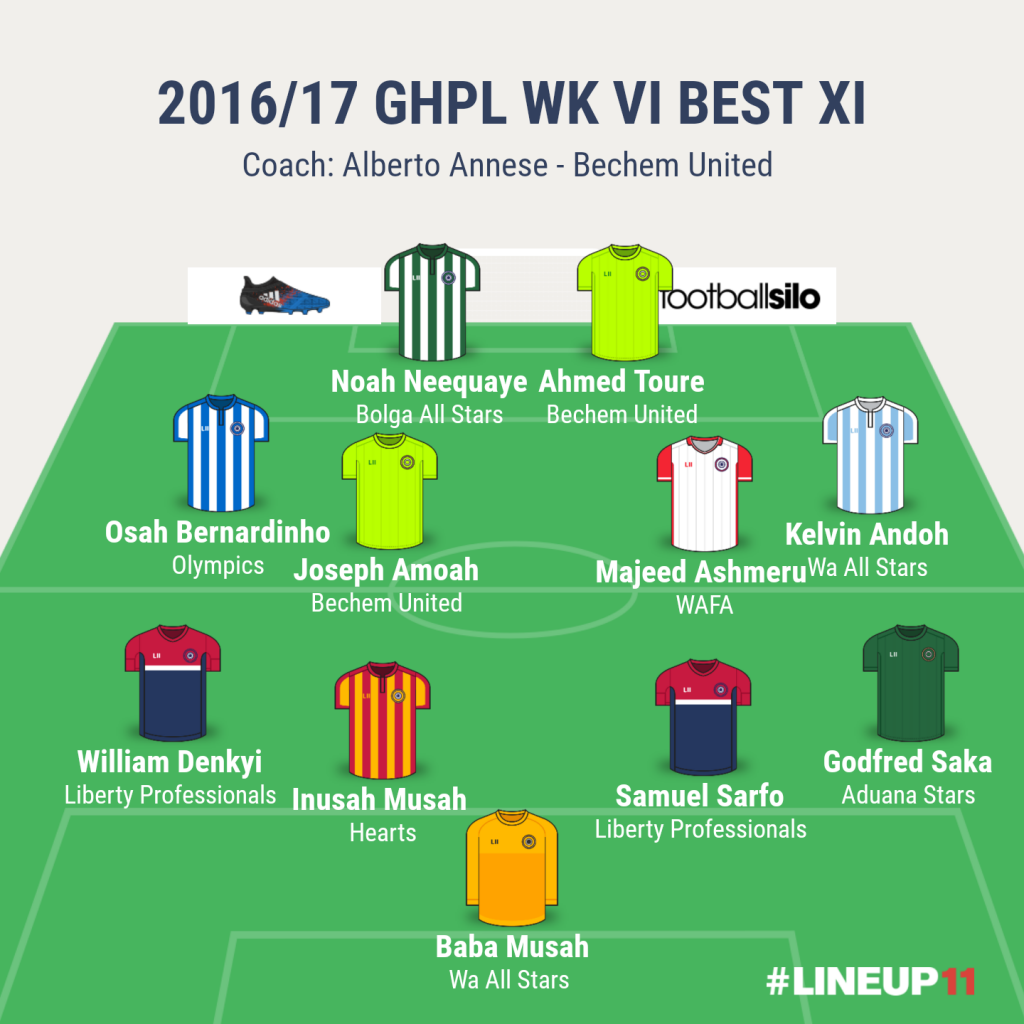 Ahmed Toure continued his fine form by hitting a brace to ensure Bechem United won massively at Obuasi by 4-2 against AshGold while Inusah Musah and Samuel Sarfo of Hearts and Liberty maintained their splendid forms to earn their sides wins over the weekend.

Noah Neequaye of Bolga All Stars, William Denkyi of Liberty and Osah Bernardinho were the revelations for the week.

Bechem United manager, Alberto Annese is the manager of the week as the team is grouped in a 4:4:2 system.

Baba Musah (GK) - Wa All Stars: Though very young, Baba Musah is filling the void left by Richard Ofori. He made three magnificent saves that prevented Medeama from scoring. He is the reason the defending champions won the game at the T&A Park.

Godfred Saka - Aduana Stars: Saka is gradually emerging as the most consistent player in the best eleven of the week. He provided two assists to ensure Aduana Stars came from a goal down to win 2-1 at the El Wak Stadium over Inter Allies.

William Denkyi - Liberty: Many may not be familiar with this name but Denkyi is the new kid on the block for Liberty. He was phenomenal for the Dansoman lads and emerged the MVP of the game.

Samuel Sarfo - Liberty: When the going was tough for the Dansoman boys, Sarfo made a case for his role as the skipper of the side. He scored the equalising goal for his side when Nicholas Gyan had shot Dwarfs ahead. He defended well afterwards and guided his side to a 2-1 win.

Inusah Musah - Hearts: As usual, he was the man to beat to get to the Hearts goal area. He stopped Olympics winger Bernardinho and made some great clearances. He scored the winner for the Phobians.

Majeed Ashmeru - WAFA: He was injured for a greater part of last season so much was mot seen of him but Majeed is gradually proving his mettle. He scored the winner for WAFA in a great comeback against Tema Youth.

Kelvin Andoh - Wa All Stars: He was one of the reason Wa All Stars won the game at Tarkwa. He scored the only goal of the game and displayed a magnificent performance.

Joseph Amoah - Bechem United: Joseph is one of the unknown characters in this week's best eleven. His stupendous performance for Bechem was a great reason for their massive win against the troubled AshGold side.

Ahmed Toure - Bechem United: He was at his scoring best and increased his tally to 5 goals in 6 matches after he had a brace against the troubled Obuasi side.

Noah Neequaye - Bolga All Stars: He was on fire and Kotoko will have their solid defenders to thanks for guiding Noah as he was the real trouble maker for Bolga All Stars. He fetched his side's equaliser and was magnificent in his play. He also won the MVP.

Osah Bernardinho - Olympics: Though Olympics lost to Hearts, Osah's performance in the game was marvelous. His skillfulness saw him toying with the Hearts defence. Had it not been Inusah Musah who was apt, Hearts could have lost the game.