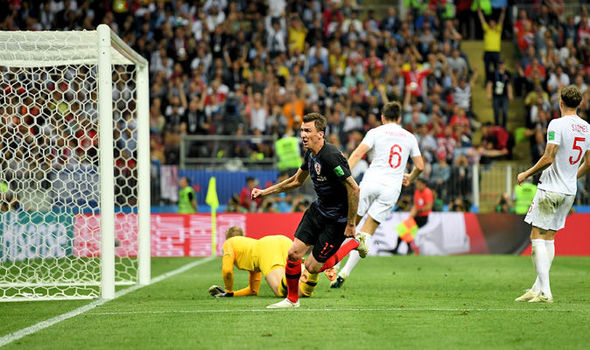 England's World Cup is over after Mario Mandzukic's goal in extra-time.

The forward fired past Jordan Pickford to give Croatia the lead - and England could not respond on a dramatic night in Moscow.

Ivan Perisic headed the ball into the area, the England defence hesitated and Mandzukic drove his finish past Pickford with 11 minutes of extra time left to earn them a place in Sunday's final against France.

England got off to a flying start when Kieran Trippier curled in a free kick after five minutes to put them ahead and they looked more dangerous throughout the first half.

Croatia took control after halftime and hit back when Perisic got in front of his marker to flick in a high cross from Sime Vrsaljko in the 68th minute.

The decisive moment here came in the 109th minute from a striker, Mario Mandzukic, who was carrying an injury and that in itself summed up the immense personality of this team.

England will go into a third-versus-fourth sideshow against Belgium the previous day and, just like 1990, they would desperately wish they were not there.