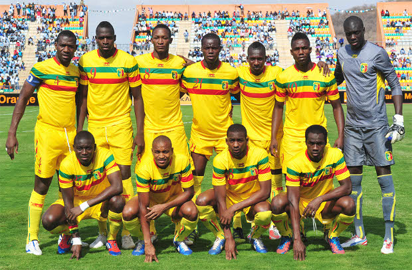 Ivory Coast held Mali to a 0-0 draw in the 2018 Fifa World Cup Qualification, group C match at the Stade du 26 Mars on Friday.

As a result, Ivory Coast remain at the top of the group standings, while fourth-placed Mali are eliminated from World Cup contention.

The match got off to a lively start, with the Eagles of Mali doing most of the attacking as they searched for an early goal.

Adama Niane, the Mali striker, tried his luck from range in the 12th minute, but his effort missed the target without troubling Ivory Coast goalkeeper Sylvain Gbohouo.

But the giant shot-stopper was called into action 13 minutes later and he denied Mali midfielder Yves Bissouma, who had unleashed a shot from outside the box.

Bissouma, who plies his trade in France for LOSC Lille, was looking lively for the hosts - orchestrating moves in the middle of the park.

With the halftime break fast approaching, Jonathan Kodjia, who was tightly marked, tried to break the deadlock for Ivory Coast, but his left-footed shot was blocked.

The hosts then suffered a blow five minutes before the halftime break as Adama Traoré had to be replaced due to an injury and Moussa Djenepo was introduced.

Djenepo nearly made an immediate impact, but his header was well saved by Gbohouo, who ensured that the first half ended goalless.

The Eagles continue to press the Elephants in the opening stages of the second-half with Souleymane Diarra and Youssouf Kone missing the target with long range shots.

WIth his side struggling to gain control of the match, Ivory Coast coach Marc Wilmots introduced experienced forward Salomon Kalou in the 67th minute.

However, 2015 Africa Cup of Nations (Afcon) champions Ivory Coast, who were missing several key players, could not create clear-cut chances in the closing stages of the match.

Gbohouo had to produce a good save in the 85th minute - denying Kalifa Coulibaly, who was looking to snatch a late winning goal for the Eagles with a header.

Ivory Coast stood firm at the back in the remaining minutes and ultimately, the two sides drew 0-0 in Bamako.