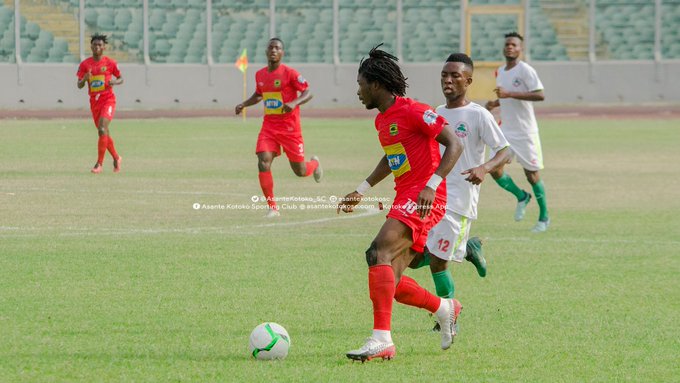 Midfielder Justice Blay scored the only goal of the match played at the Baba Yara Sports Stadium in Kumasi on Sunday afternoon.

Maxwell Konadu's charges made a strong start and took them only two minutes to find the net. Blay headed into the net after a well-taken corner by Patrick Yeboah. The goal, scored in the second minute, was the first of the new season.

They maintained their dominance. In the 13th minute, Songne Yacouba received a brilliant pass and release Emmanuel Gyamfi but his left-footed shot behind the penalty box flew narrowly wide of the left post.

Yacouba thought he had doubled the lead in the 18th minute when he put the ball in the net but the goal was chalked off as he was offside. A minute later Kotoko struck the crossbar courtesy Collins Ameyaw.

Kotoko continued from where they left off in the first half. They dominated possession and chances created but could not score.

On 52 minutes, Kelvin Andoh shot straight at Moosie from close range. Yacouba, two minutes later, latched on to Augustine Okrah's cross inside the penalty box but failed to guide his effort on target.

Konadu will be pleased with the win but disappointed with the scoreline. Their next game is against Legon Cities FC while Wonders will be at home against Dreams FC.