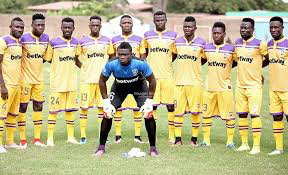 The Mauve and Yellows are back on a familiar territory as they seek to begin their campaign on a blistering note.

It’s a massive test of credentials of coach Samuel Boadu, who has delighted local football with his philosophy.

The focus in terms of recruitment has been on younger players this season although new import Prince Opoku Agyemang is expected to be a regular starter.

The Tarkwa-based side have brought in eight new players to augment their squad as they aim to challenge for the Premier League crown.

Striker Prince Opoku-Agyemang is expected to be the arrowman for the side after arriving from New Edubiase.

Boadu is tipped to give a number of youngsters an opportunity this season.

However, he will also rely on midfield dynamo Kwasi and Eric Kwakwa who have returned to the team after a year out.

It’s promises to be a cagey affair against the Mysterious side who have been busy working behind th scenes.

A big game for both Dwarfs and Medeama so early in the season will be a stern test for both sides at the Cape Coast Stadium but in some ways reduces the pressure on them.