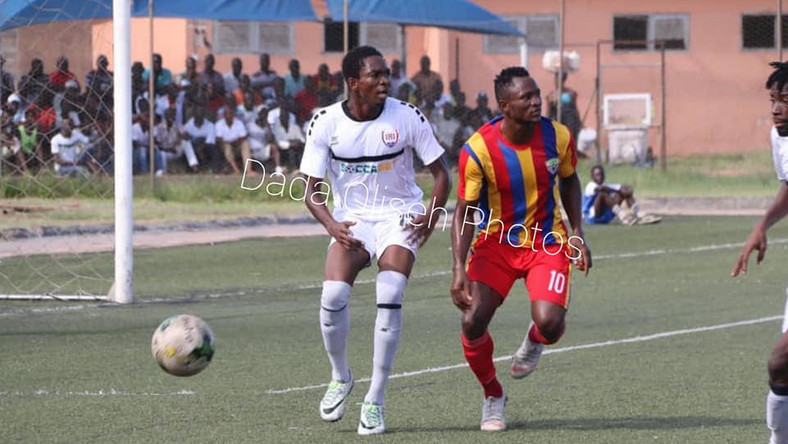 Mohammed Alhassan's late goal secured a draw for Hearts of Oak in a mouthwatering game at the Accra Sports Stadium against Inter Allies.

Inter Allies took the lead through Samuel Armah in the first half before Alhassan pulled parity with five minutes left.

Samuel Armah latched onto a Victorien Adebayor pass to give the Eleven is to One Boys the opener, after the Nigerien outpowered Hearts defenders Raddy Ovouka and Mohammed Alhassan.

Both sides had come close before the opener in the 37th minute, with Adebayor with the clearest chance after beating a slow Benjamin Agyare on the left.

Benjamin Afutu came close to grabbing the equalizer for the Phobians but a brilliant Gideon Ahenkorah in the post of Inter Allies denied the midfielder right at the stroke of half time.

Coach Edward Nii Odoom brought on Mitchel Sarpong for Nurudeen Alhassan in the second half as the Phobians chased for an equalizer.

Benjamin Agyare's rebounded free-kick nearly got the Rainbvow club into the game but the effort went inches wide.

Danger man Adebayor kept terrorizing the Hearts of Oak defence on the other hand, as he took on three players before his neat lobby went a little over the bar.

Joseph Esso weaved in a ball to second half substitute Daniel Barniel, who missed from close range after taking to much time on the ball.

The Phobians mounted a strong fight back in the final ten minutes, before Mohammed Alhassan finally pounced on a Raddy Ovouka free kick to level the scoreline.

Kofi Kordzi thought he had won a penalty for Hearts after Fahd Ibrahim appeared to handle the ball in the box but the referee made the right decision by waving on.

Five minutes was added on but that could not make any difference as the game ended in an entertaining 1-1 draw.