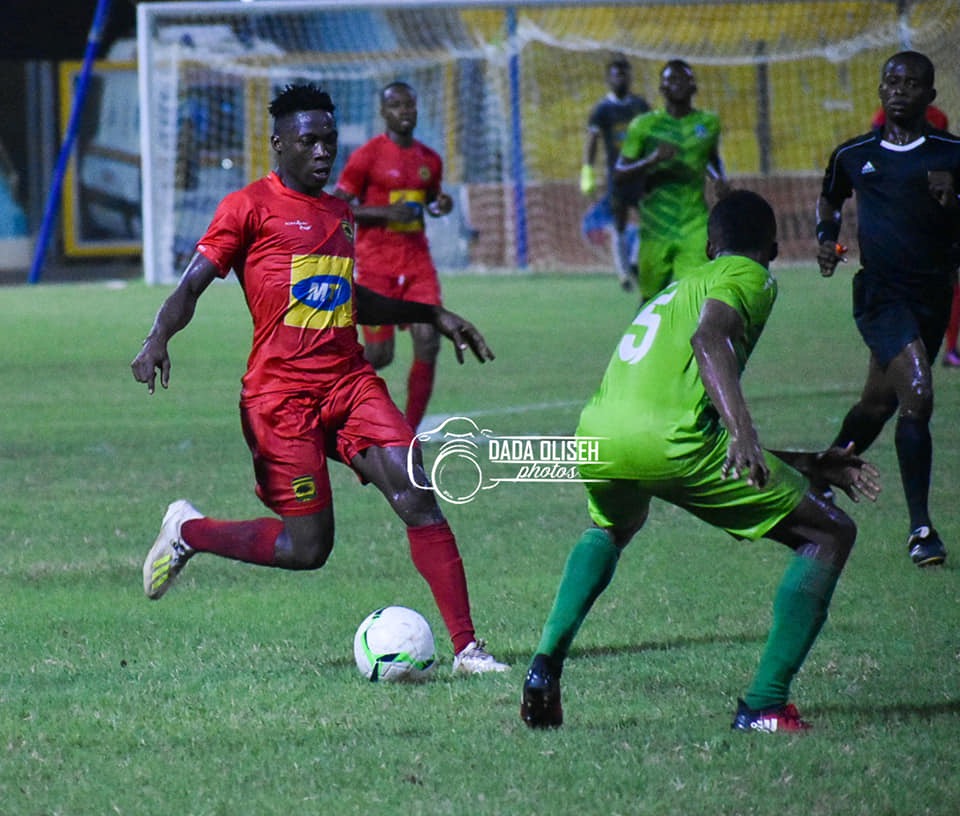 Asante Kotoko dropped points for the first time at their adopted home Accra Sports Stadium as they played out a goalless draw with Elmina Sharks.

It was Kotoko’s second game in Accra following the closure of their own grounds Baba Yara Stadium in Kumasi.

They managed to win the first against Bechem United convincingly but on Thursday night they weren't at their best especially in front of goal to take all three points.

After an encouraging start, Kotoko created the first real chance of the game in the 11th minute. Augustine Okrah latched onto Wiliam Opoku's cross but heads a whisker of the near post.

Sharks made an attempt in the 15th minute as an attacker sent in a sweet cross into the box of Kotoko but goalkeeper Kwame Baah was alert to avert the danger.

In the 29th minute, Benjamin Tweneboah then got the end of an inswinger but failed to hit the target. A few minutes later, Benjamin Arthur managed to get his shot on target but Kwame Baah saved.

Kotoko though squandered the best chance of the first half as Augustine Okrah struck the upright from close range in the 30th minute.

Two minutes into the second half, Asante Kotoko had a penalty appeal waved away after midfielder Adom Frimpong was body-checked in the box.

Kotoko thought they had scored in the 58th minute. An inch-perfect cross found the head of striker William Opoku who directed it towards goal but the goalkeeper Lord Bawa Martey produced a fine save.

Sharks had a penalty shout ignored in the 69th minute. Dennis Mensah made a brilliant run into the box and was brought down but the referee viewed the challenge as a fair one.

Kotoko then had to rely on Kwame Baah to deny Sharks from getting the first goal in the 76th minute. Benjamin Bernard Boateng was put clean through and dribbled a defender. He had only Kwame Baah to beat but the goalkeeper managed to avert the danger with some excellent work.

The two teams failed to produce any chance thereafter as the game ended goalless.

The draw means Kotoko remain fourth while Shakrs have moved to fifth.