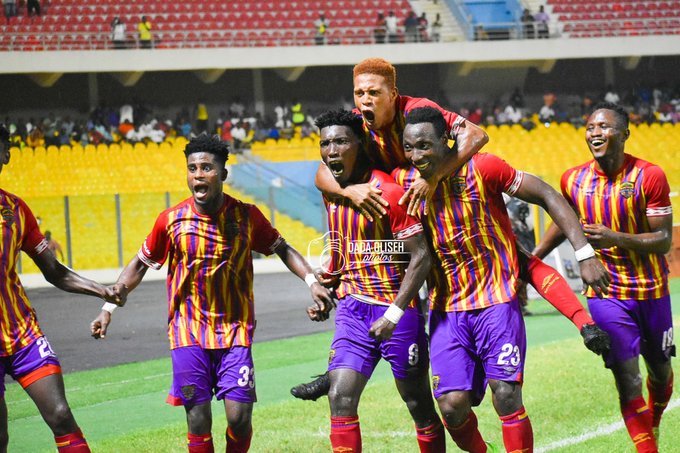 Benjamin Afutu scored a second half brace to add to Joseph Esso’s first half strike and Daniel Afriyie’s first goal for the club as the Phobians thumped their noisy neighbours Great Olympics at the Accra Sports Stadium.

Joseph Esso tapped in after the Great Olympics goalkeeper failed to grasp a ferocious shot from Kofi Kordzi in the 16th minute to give the Phobians the lead.

The Phobians had come close to scoring when Kordzi’s effort went inches wide before Esso had a weak effort saved.

Hearts controlled the game after the early lead and went into the break 1-0 up.

The Phobians returned from the break chasing for a second, and just moments later Kordzi sent in a cross which was missed by his attacking partners.

Emmanuel Clottey had Olympics’ biggest chance of the half but missed by inches.

Raddy Ovouka nearly gave Hearts the cushioning with a long range effort which went over the bar.

Benjamin Afutu scored the first of his double with a powerful header in the 65th minute.

The hardworking midfielder added his second two minutes later after connecting from a rebound.

Esso could have made it four after a good team move but his effort was not good enough.

Teen sensation Daniel Afriyie sealed victory with his first goal for the club in injury time to give Hearts a completely convincing win.