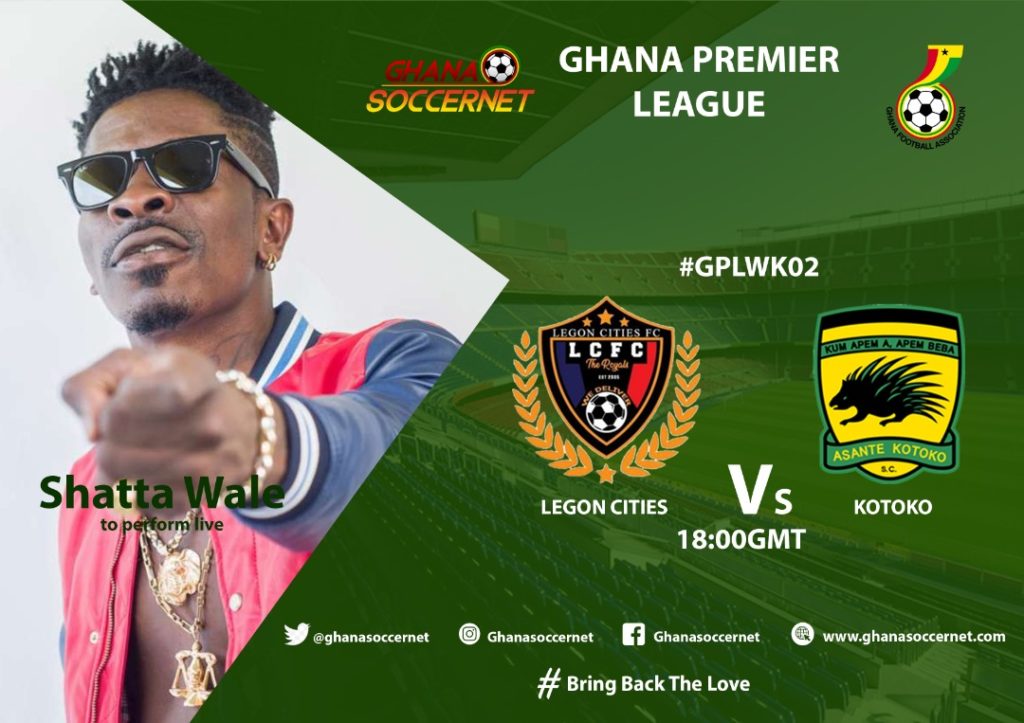 Asante Kotoko are seeking to maintain their winning start to the Ghana Premier League but have to do it the hard way because they face a confident opposition in their second game.

They are up against Legon Cities FC at the Accra Sports Stadium on Friday night in the first game of week 2 of the league.

The clash has garnered massive attention with the stadium expected  to be filled as musician Shatta Wale will perform before the start of the game.

Kotoko come into the game on good form having opened their campaign with a 1-0 win against Eleven Wonders and thrashed Tamale City FC 6-0 in a preparatory match during the week.

Their opponents, Legon Cities didn't a smooth start as they earned 2-2 draw with Liberty Professionals but feel more confident heading into the game because their performance last Sunday was very encouraging. They took  a two nil lead before last minute equaliser denied them deserved victory.

Aside their performance on the field, they have been the talk of town this season. Their social media game ahs been top notch setting them apart from other the clubs.

They will have experience goalkeeper Fatau Dauda in goal after they confirmed the signing in a stunning way which attracted rave reviews.

For Kotoko, they have all their arsenal and head coach Maxwell Konadu will be he happy knowing captain Felix Annan has committed his future to the club by signing a contract extension.

"I play every game to win, but I have a lot of respect for them. And I know they [Kotoko] have good players, but I am confident in my players.

''Like I said I respect each opponent, but you know I want to win against every one of them.''

“We know the team we are going to meet is a young team. They have a lot of young players that can run a lot and we are bracing ourselves for the threat they pose. Of course, we are Asante Kotoko. We will go out there and play our game”

He continued, “We will make sure that we control the game and we will try to win the game for our fans. We created numerous chances [against Berekum Chelsea last Sunday] that at least two, three would have been okay for us. That is what we have worked on. We want to put a lot of goals past our opponent. "

This means a highly competitive game is expected.