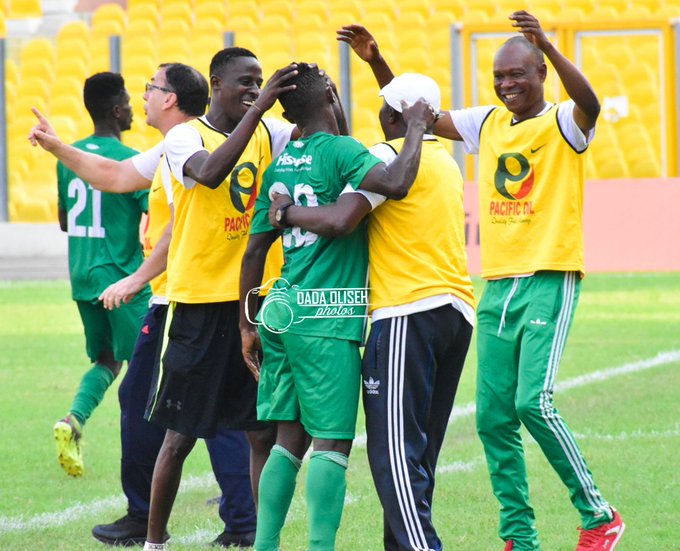 Great Olympics will head out to play King Faisal Babies in Week 8 of the 2019/20 Ghana Premier League on Wednesday.

King Faisal will be hoping for redemption when they welcome Great Olympics to the Baba Yara Sports Stadium, having failed to collect three points after seven round of matches in the ongoing campaign.

It will be the first time in ten years since the Kumasi-based side will be meeting the Dade Boys in the Ghanaian top-flight league.

The last time both sides met at the same ground, King Faisal emerged victorious with a 1-0 win.

However, their form going into this encounter does not give them the upper hand against the Accra giants after picking only three points in seven games.

There have been 6 matches played by the home team in the last year. They have no wins; 3 draws; and 3 losses. Therefore, King Faisal have won 0%, drawn 50%, and lost 50% of their recent matches.

In these matches, they have averaged 1.0 goals for, and 1.83 goals against.

On average they have scored 1.0 times when at home in this same period and they have conceded 1.33.

Their recent performance, in league or cup football, shows that they have scored a total of 8 goals in their last ten matches and 1 of these latest matches have been victories.

Meanwhile, Great Olympics have 7 points in the league, which puts them in 14th place.

There have been 6 matches played by this side over the recent 12 months. They have 2 wins; 1 draw; and 3 losses.

On average they have scored 0.33 times when away in this period while they have conceded 1.67.

Their recent performance, both home and away, shows that they have scored a total of 10 goals in their last ten matches - 5 of these matches have been wins for them. There have been 2 occasions when both Great Olympics and their opponents have scored. The total number of matches with over 2.5 goals scored is 2 from their last ten.