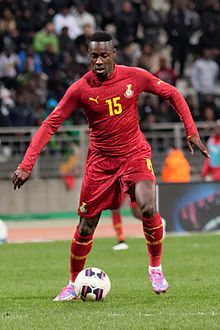 Black Stars striker, Richmond Boakye Yiadom is anticipating a tough campaign for Ghana after the four time African Champions were paired alongside defending Champions Cameroon, Benin and Guinea-Bissau in Group F of the 2019 Africa Cup of Nations which kicks off in June.

According to him, there are no minnows in the upcoming tournament as all the teams that have qualified deserve to be there thus Ghana should expect a strong opposition from all teams they will face.

“It’s not an easy group because any team which made it to the Africa Cup of Nations deserves to be there”, he told GHANAsoccernet.

“We (Ghana) don’t have to take it normal or easy, we need to play and fight like how played during the qualifiers and I know we can qualify out of the group. With God on our side we can bring the cup home as well, he added.

Boakye-Yiadom is hoping his remarkable form at club level for Red Star Belgrade will earn him a place in Kwesi Apppiah’s squad for the upcoming Africa Cup of Nations.

He has scored 13 goals in 15 matches for his club in the ongoing season. Boakye Yiadom is hoping to return to the field this week after been side-lined for two weeks due to injury.

Ghana will begin their campaign on June 25 against Benin in the AFCON.