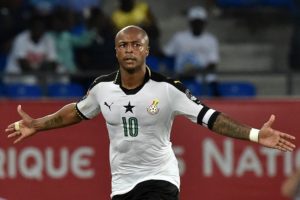 Andre Ayew will captain Ghana at the 2019 AFCON

Turkey-based midfielder Andre Ayew will be named the substantive Ghana captain in massive shake-up ahead of the 2019 Africa Cup of Nations, Ghanasoccernet.com can exclusively reveal.

Coach Kwesi Appiah will make the defining announcement latest by Wednesday when the Black Stars provisional squad for the tournament is named.

This comes after coach Appiah took the decision to strip Asamoah Gyan of the team's leadership role as he would only be a pit-part player at the tournament in Egypt.

Ayew who commands big respect among the players in the Black Stars is expected to instill the needed discipline in the squad to help Ghana win the title.

With the inspirational Fenerbahce player moving up, a new deputy captain will be named with the coach as part of the measures meant to inject new energy in the squad

This will be the first time Ayew is captaining the senior level permanently but he has led Ghana before at youth level.

He famously captained the Black Satellites to the World Youth Championship title in 2009.

Ayew is widely expected to become a good captain of Ghana, having been one of the livelier and inspirational figures in the current setup.

The Ayew legacy thus continues, following the exploits of the legendary Abedi Pele who captained Ghana for almost 10 years.