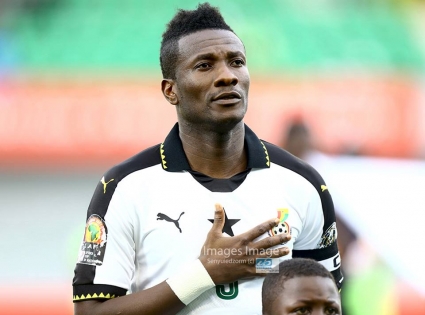 General captain of the Black Stars, Asamoah Gyan says Ghana is ready for the upcoming Africa Cup of Nations to be staged in Egypt despite not recording a win in their pre-AFCON training matches in Dubai.

The Black Stars lost to Namibia by a lone goal in their first friendly game which saw Ghana Coach Kwasi Appiah name his final 23-man squad for the tournament after assessing his players.

Kwasi Appiah fielded a strong starting 11 against South Africa on Saturday at the Police Stadium in Dubai hoping to get a victory against Bafana Bafana but it ended in a stalemate in the team’s second and final preparatory game.

He further went on to say that the main tournament is different from that of the training games and hopes the team will peak when the tournament kicks off.

“The tournament is a different ball game altogether we are happy there is no injury in camp and all the players are ready for the tournament”. The all-time leading top scorer for the Black Stars will be playing his last AFCON and hopes to replicate his incredible goal scoring at the tournament.

Gyan has scored eight goals in six AFCON tournaments. Team Ghana is expected to depart to Egypt on June 20, 2019.

The Black Stars are in Group F alongside defending champions Cameroon, Benin and Guinea-Bissau. Ghana will play their opening game against Benin on June 25, 2019 at the Ismailia Sports Stadium.