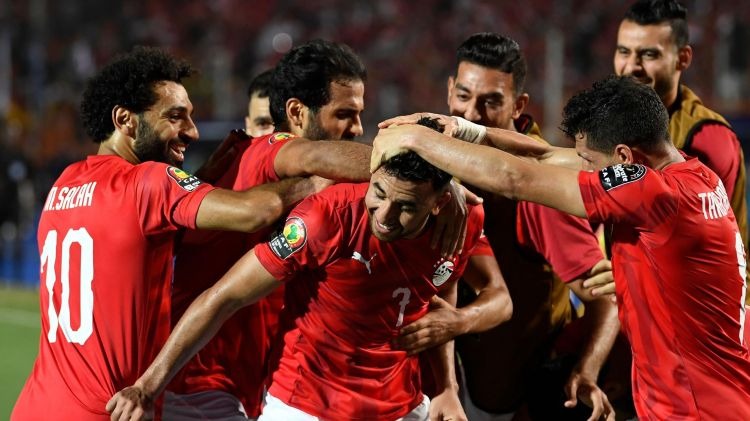 Mahmoud Hassan 'Trezeguet's beauty of a goal in the 41st minute proved to be the difference as Egypt kicked off their Total Africa Cup of Nations Egypt 2019 campaign on a winning note with a 1-0 victory over Zimbabwe at a fully packed Cairo International Stadium on Friday night.

Roared on by their enthusiastic home fans who came to the stadium in full voice and full color, the Pharaohs should have won by a bigger margin had they been more clinical with the chances that came their way especially in the opening 45 minutes of the Group A clash.

But, they ensured the most important bit of the night, the three points, remained within their guard as they started off their journey for a record-stretching eighth African crown in a positive way.

Trezeguet gave the hosts a much deserved lead four minutes to the break with a peach of a goal. The winger broke down on the left before playing a quick one-two with Ayman Ashraf and unleashing a curling shot that beat the Zimbabwe keeper Edmore Sibanda.

Sibanda, who unfortunately had to come off injured with 13 minutes to play had been kept busy all through the opening exchanges and had been forced to make two good saves within the opening two minutes.

First, he did well to turn behind for a corner a teasing cross from Mohammed Salah before he tipped over Marwan Mohsen’s header off a short start to the same set-piece, the ball delivered in by Salah. The Liverpool winger was Egypt’s most lively player, literally running down the wing causing havoc. In the ninth minute, Salah played some one-two quick change of passes before laying a cross to Abdallah Said, but his shot was saved.

Salah ran down the right once again, this time, Sibanda diving low to punch out his cross and the ball fell on Said, but he could not make most of the gift hitting the ball over.

Zimbabwe had been put on the back foot by the fast paced Egyptians and they had to wait till the 36th minute for their first effort on target.

A quick free-kick was played through to Khama Billiat who came one on one with Mohammed El Shenawy, but he keeper spread his body well on the floor to block the effort for a corner.

In the second half, Egypt kept the same momentum and just four minutes in, Trezeguet forced a brilliant save off Sibanda when he found some shooting space at the edge of the box to curl in a shot that the keeper smothered behind for a corner.

In the 66th minute, Sibanda came to Zimbabwe’s rescue again this time blocking an effort from Mo Salah who had been put through with a defense splitting pass by Trezeguet.

For all his heroic efforts, Sibanda’s evening had to end in a sad way as he was replaced by Elvis Chipezeze with 13 minutes left, an injury he picked up after a clash with Mohsen in the first half forcing him out.

Chipezeze also had some work to do in the few minutes he came in and with four minutes left went down well to save a Salah effort on his weaker right foot.

DR Congo will face Uganda in the other Group A clash on Saturday at the same venue.