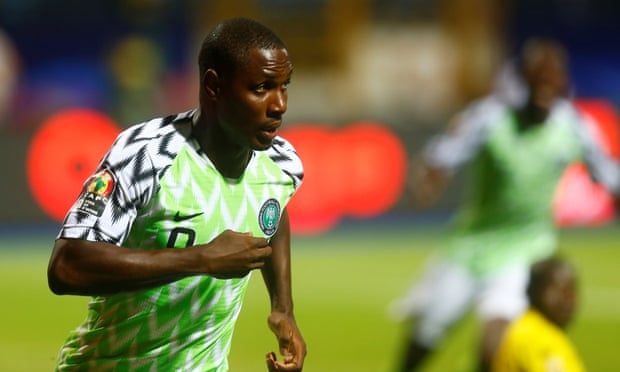 Odion Ighalo stepped off the bench to score the winner as Nigeria broke off the resilience of debutants Burundi to beat them 1-0 at the Alexandria Stadium on Saturday night and start off the search for a fourth Africa Cup of Nations title on a high.

Ighalo had spent just four minutes on the pitch having come on for Paul Ebere on 72 minutes. The China-based forward calmly beat Burundi keeper Jonathan Nahimana on a one-on-one after running through to an outrageous assist from Ola Aina.

Aina picked up a pass from Alex Iwobi before backheeling through to Ighalo who finished the rest of the job with a calm finish.

Even as debutants, Les Hirondelles showed they were not afraid of taking on the continent’s big giants as they had the best chances to break the deadlock in the opening 45 minutes.

In the 14th minute, a well weighted ball from Gael Bigirimana in midfield landed perfectly on Cedric Amissi’s racing feet inside the box with the winger setting himself up with the first touch, but his effort was too close to the Nigerian keeper Daniel Akpeyi.

Bigirimana had another brilliant opportunity when he struck a stinging freekick from range in the 28th minute with Akpeyi being forced to fist it away as it came with pace and power.

Burundi were denied by the bar in the 37th minute when Cedric Nsabiyumva’s header off a Shassir Nahimana freekick on the left came against the woodwork. Nsabiyumva picked up the rebound but his volley went wide off target.

Despite commanding most of the possession, Nigeria had limited chances at goal and their best effort on target was on 12 minutes when Paul Ebere forced keeper Nahimana to a great save with a header off an Iwobi cross.

Samuel Chukwueze was the most exciting player off the left wing as his pace and trickery on the ball often proved to be too much to bear for the Burundian defenders.

Nigeria were forced to make a change six minutes to the break when Abdullahi Shehu was stretchered off and his place taken by Collins Chidozie on the right side of defense.

The Eagles came back hungrier in the second half and played with more urgency.

Six minutes after the restart, Kenneth Omeruo’s header at the backpost off a Peter Etebo freekick went inches wide. In the 70th minute, Chukweuze had a chance with a dinking effort as he raced though on goal from the left but the effort was over.

A minute on the turn, Abdul Razak Fiston, Burundi’s top scorer during the qualifiers almost caught keeper Akpeyi off his line with a shot from range, but the shot stopper managed to dive well to his right and palm the ball away.

But, the change didn’t provide the shield it was aimed at with Ighalo icing the cake after 76 minutes.

Burundi almost found a way back into the game immediately when Akpeyi made an error handling a cross, but Fiston could not take advantage, his shot at goal blocked.

Burundi’s next assignment will be against fellow debutants Madagascar next Wednesday while Nigeria will face Guinea in a mouth-watering tie the following day.