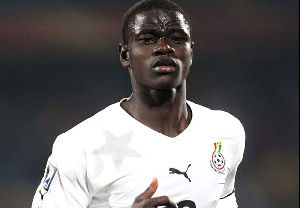 Ghana defender Jonathan Mensah missed the Black Stars training on Thursday in preparation for Monday's 2019 Africa Cup of Nations Round of 16 clash with Tunisia.

This makes him doubtful for the game against the Carthage Eagles as coach Kwesi Appiah will need all his men fully fit for the match that will decide whether they will play in the quarter-finals.

The Black Stars team doctors are monitoring his recovery as they are not keen on rushing him out of the injury to further complicate matters for the USA-based centre-back.

Ghana returned to training in Ismailia on Thursday but Mensah was absent clearly not fully fit from the injury.

The Columbus Crew defender started off his campaign at the 2019 Africa Cup of Nations (AFCON) tournament during Ghana’s first match against the Squirrels of Benin where he was introduced in the second half when center-back John Boye was red-carded.

Jonathan Mensah went on to start for the team in their second Group F match against the Indomitable Lions of Cameroon last week.

Though he lasted the entire duration of the match, he picked up an injury that ruled him out of the side’s final group match against Guinea Bissau yesterday.

Doctors want the experienced defender to be full fit to make him stay in contention to feature for the Black Stars when they face the Carthage Eagles of Tunisia in the round of 16.

He is expected to train with the team for the next 5 days for the technical team of the side to monitor his situation and decide whether he should be handed a spot in the starting lineup or not.

The Round of 16 tie with Tunisia will be played on Monday, July 8, 2019, at the Ismailia Stadium.