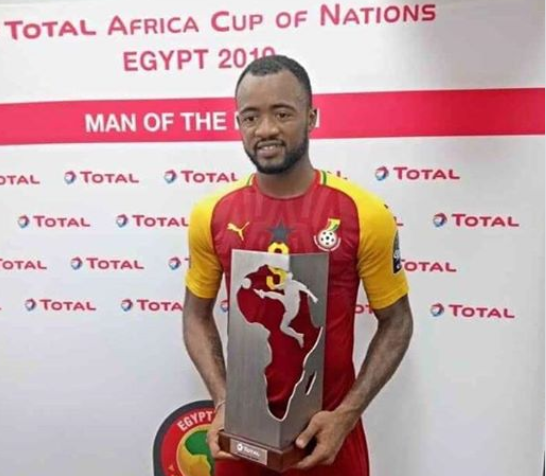 Ghana striker Jordan Ayew was named Man-of-the-Match  in the Black Stars 2-2 draw with Benin in their opening 2019  Africa Cup of Nations on Tuesday.

The England-based attacked was handed the award thanks to the hardworking approach he adopted during the game that saw the Black Stars play with ten men.

The Crystal Palace frontman had to drop deep to assist the midfielder following the harsh sending off of defender John Boye.

Ayew was a constant menace for the defenders of the Squirrels as he fought with power on several occasions which made him standout.

The son of Ghana legend was involved in the first goal his brother scored and then ended the night by scoring a masterful personal effort after shrugging off two defenders to fire past the goal keeper.

Underdogs Benin hit back to secure a 2-2 draw with 10-man Ghana after the Black Stars had a player sent off for time-wasting in bizarre circumstances at the Africa Cup of Nations on Tuesday.

Michael Pote gave Benin a shock second-minute lead in the Group F match before goals from brothers Andre and Jordan Ayew put Ghana 2-1 ahead at halftime.

But Ghana were stunned in the 55th minute when defender John Boye, already booked, stepped up to take a free kick inside his own half, moved away to let a team mate take it and was given a second yellow card.

Pote then equalised for Benin with his second of the night in the 64th minute, diverting a low shot into the net after a short corner.

Following the opening round of games, Cameroon top the group with three points following their 2-0 win over Guinea Bissau earlier on Tuesday.