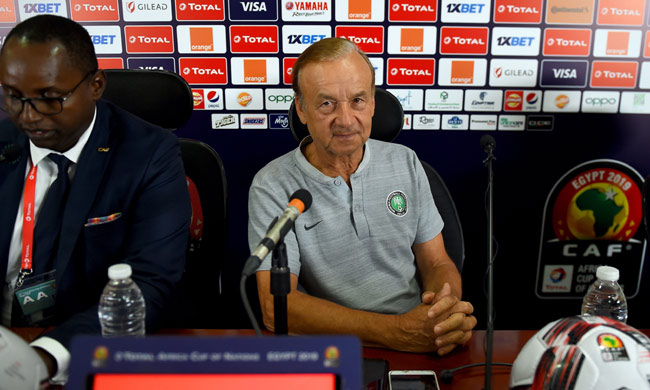 Nigeria's coach Gernot Rohr attends a press conference on the eve of the 2019 Africa Cup of Nations (CAN) quarter final football match between South Africa and Nigeria at Cairo international stadium on July 9, 2019. (Photo: AFP)

Nigeria coach Gernot Rohr could not resist a dig at the VAR system after his team's win 2-1 over South Africa at the Africa Cup of Nations on Wednesday, saying the time taken to confirm his opponents' goal had unsettled his team.

The VAR system, which was introduced at the quarter-final stage and is being used in the competition for the first time, made its first significant intervention when it overruled a lineman's decision to disallow Bongani Zungu's goal for offside.

"For five minutes we had to wait, goal or no goal, and that was hard for my team," the German told reporters.

"The second goal did not go in for us and then you have seen this free kick, and this VAR decision -- you never know what can happen with VAR on a free kick."

Rohr also praised the character of his side who came back from 2-1 down to beat Cameroon 3-2 in the previous round and grabbed a late winner in Wednesday's match.

"Now we are mentally strong and we were able to come back," he said. "The attitude of my players was wonderful, such a good relationship with everyone."

Rohr recalled when Nigeria were beaten 2-0 by South Africa at home in a qualifier for the tournament two years ago, one of his first games in charge.

"We had a young team but this team continued to work and this result perhaps helped us to beat in the next game Cameroon, who were African champions, 4-0 in the same stadium (in a World Cup qualifier), so we could learn from this match," he added.