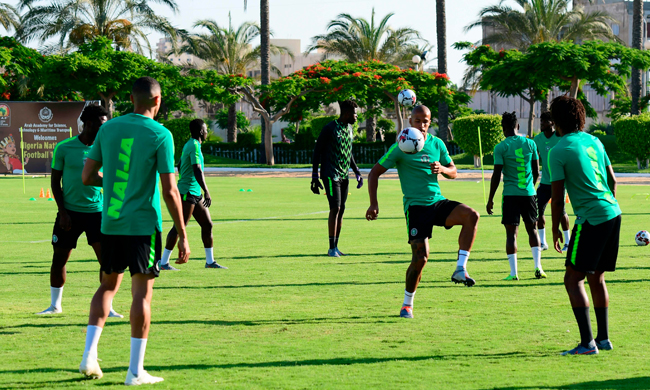 Nigeria's preparations for the Africa Cup of Nations have been hampered after several members of the squad went down with an cold-like illness, coach Gernot Rohr said on Friday.

"Unfortunately, we don't have everybody because four or five of our players could only start training on Wednesday and they missed one week of physical preparations, so we don't have the best team," he told reporters.

The Super Eagles, who kick off their campaign against debutants Burundi in Group B on Saturday, are taking part at the tournament for the first time since they won it in 2013, having remarkably failed to qualify in 2015 or 2017.

"There is much joy at being here after missing the tournament twice," he said Rohr, adding that the team were itching to get started after a long build-up.

"For three weeks, we have been together -- we started in Nigeria in the first week, in the rainy season so it was very different from here. We had a friendly against Zimbabwe in heavy rain, some of us caught a cold, everyone was wet and half of our team was sick," he said.

Nigeria then travelled to Egypt and played another friendly, losing 1-0 to Senegal on Sunday.

Rohr said the new format for the tournament -- the number of teams has been increased from 16 to 24 -- would make it more difficult to win.

"It's longer, the physical side of the game is a bit different also because of the hot temperatures but I only see nice pitches in good stadiums and the passion for football in Egypt is so high I think it will be a very exciting Nations Cup," he said.

The side will be captained by John Obi Mikel, who has not played for his country since the last World Cup but said he has stayed in touch.

"I was always in contact with the team, coach and players, I knew everything that was going on," said Mikel, who said he only wanted to play for his country when he was "ready and focused and motivated.

"The players know what it takes to win this tournament but only three of us were in the team that won in 2013," he said.

"It's a very young team...there is a very good blend of young and old players, the spirit in the team is very good."