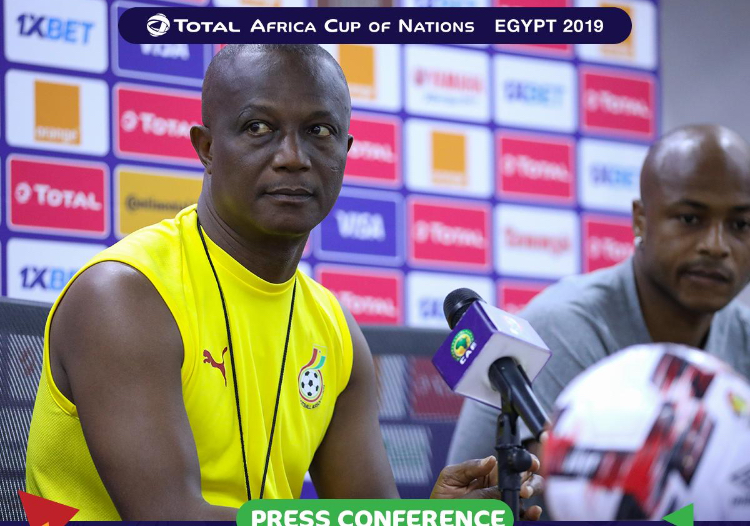 Finder Sports has reported that  Ghana coach Kwasi Appiah is having some difficulty in selecting his first starting 11 in today’s match against Benin to be played at the Ismailia Sports Stadium.

The Black Stars wrapped up their preparations on Thursday in Dubai and arrived in Egypt on Friday. The team has been training at the Suez Sports Complex ahead of their opening game today.

According to our source, every player is in such a good form thereby forcing Kwasi Appiah into a dilemma as to who to select to start in today’s game.

His main headache is that of the midfield selection which boost of players such as Thomas Partey, Kwadwo Asamoah, Andre Ayew, Mubarak Wakaso, Afriyie Acquah, Christian Astu, Thomas Agyepong and Samuel Owusu.

With Appiah looking to blend a youthful side with experienced players in Ghana’s first game some, key players are likely to start from the bench.

Meanwhile, Ghana’s last result in an opening game in the AFCON ended in a win against Uganda at the 2017 Africa Cup of Nations held in Gabon.

Newly appointed captain Dede Ayew scored through the penalty spot to secure the win for the four-time African champions.

The Black Stars will be hoping to begin this campaign with a win before they come up against defending champions Cameroon in their second group game on Saturday June 29, 2019 at the Ismailia Sports Stadium.

On the other hand Ghana has to be wary of the threat posed by Benin who have some dangerous players such as Stephen Sessegnon (Genclerbirligi) and Steve Mouine of Huddersfield Town.

In the build up to this game Benin have won four matches in their last five competitive matches played (W4, L1) while Ghana has two wins, one draw and a defeat (W2 D1 L1).

Below is Ghana’s full 23-man squad for the tournament