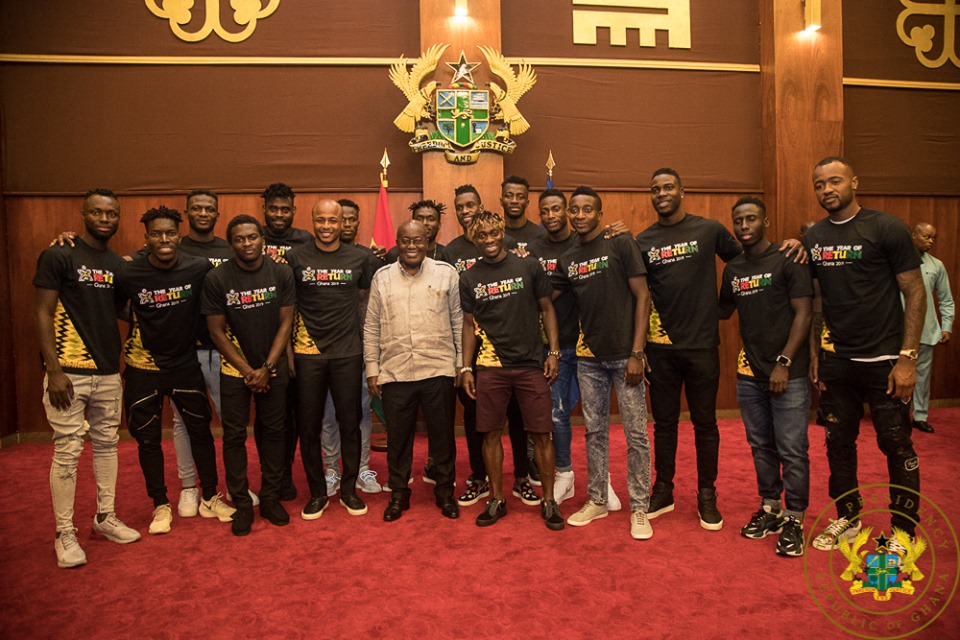 President Nana Addo Dankwa Akufo Addo has emphasized on the need for players of the National football team, the Black stars to work as a team without which the team will fail at the 2019 Africa Cup of Nations.

With teamwork, the President was confident that the Black Stars will be able to end Ghana's 37-year Nation's Cup drought, at this year's tournament in Egypt.

"So teamwork is absolutely critical. You have to work for each other. Helping each other to win the trophy, that's the teamwork we are looking at", he said.

The President gave the admonishment when he met the players, management and technical body of the Black Stars ahead of their departure to the Emirates to commence their preparation for the 2019 African Cup of Nations (AFCON) tournament that would be held from June 21 to July 19.

The President expressed confidence in the ability of the team and its technical handlers to surmount that challenge ahead and appealed to the playing body to make the needed sacrifices to ensure that Ghana was once again placed at the top levels of African football.

He reiterated on the need for commitment and unreserved respect for the authority of the coach, Kwasi Appiah and that of the captain of the team.

"You have to respect unreservedly, the authority of the Coach and the authority of the Captain...that is basic rules, non-negotiable rules, if you don't do it, everybody will be going their separate ways. If you do that, you cement the team work and you will become a cohesive forceful force"

The President assured the players of the support of the nation.

"Thirty million Ghanaians are behind you and praying feverishly...that the 37 years wait since we last won the cup will come to an end this year.

"Our record has been outstanding as a footballing nation, one of the very best on the continent... And the time has now come to improve the record," he told the team.

President Akufo-Addo assured the team that government would provide the needed support to enable it succeed in the tournament.

"I am determined to give all the support government can give to sustain you and give you the best opportunity to bring the cup home”, he said, and assured the team he would personally travel to Egypt to watch their first match against Benin on June 25.

Dr K. K. Sarpong, the Chairman of the Black Stars Management Committee, assured the President that the team was prepared physically and psychologically, and remained united for the AFCON campaign.

"I believe we have been given enough resources and it is up to us the Management Committee,  the Technical Committee and the Players to do battle and bring honours to this country" he said.

Dede Ayew, the skipper of the side, also assured the President that the team was ready and equal to the task, and would make Ghana proud in the tournament.

The team leaves Ghana June 1, 2019 for Dubai to commence preparations for the tournament.

By Daniel Nornor/ The Finder