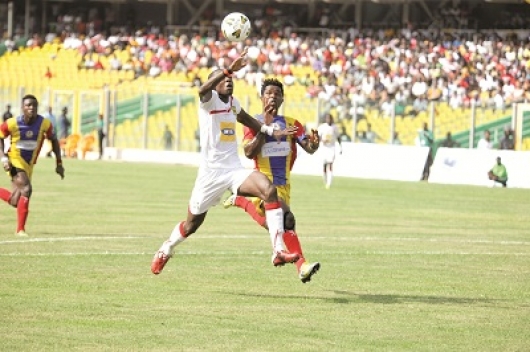 Hearts and Kotoko are in a tango over points

The President’s Cup match between Asante Kotoko and Hearts of Oak comes off on Sunday at the Baba Yara Sports Stadium and will serve as a curtain raiser for the 2019/20 Ghana Premier League season.

The game has been postponed on two occasions and will finally come off this weekend according to the organizers.

This will be Maxwell Konadu’s first competitive game in charge of Asante Kotoko as he takes on arch-rivals Hearts of Oak in this crucial encounter.

Asante Kotoko will also be looking to do a double over Hearts of Oak in the President Cup.

The Porcupine Warriors are the defending champions of the trophy after they defeated the Phobians on penalties to win the 2017 edition of the President Cup held at the Baba Yara Sports Stadium.

Head coach of Hearts of Oak, Kim Grant will also be seeking for revenge in his weekend’s game as his side lost to Asante Kotoko when both sides met in the Tier I Special Competition semi-finals.

Both teams will be using the game as preparation for the upcoming season.

Hearts takes on Berekum Chelsea while Asante Kotoko playEleven Wonder in their respective league games on match day one.