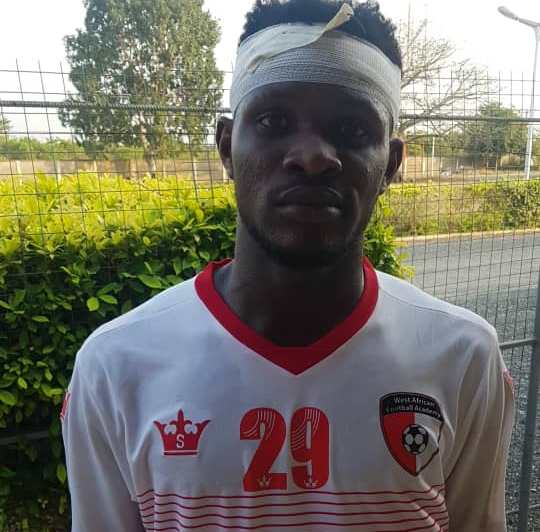 Four-goal hero Daniel Agbloe was indisputably named Man of the Match on Sunday as WAFA beat Medeama 5-4 at home.

The Ghana youth international opened the scoring in the sixth minute when he back heeled the ball into the net after a cross from left back John Tedeku.

After half hour, striker Godwin Agbevor sublimely put the ball past goalkeeper Eric Antwi with a tap-in effort from close range.

Seven minutes later Agbloe scored his second goal of the afternoon and made it three-nil.

WAFA were forced to make a forced substitution after midfielder Lawrence Agyekum got stretchered off and was replaced by Forson Amankwah.

Just before the half time whistle, Agbevor whipped in a cross from the right and Agbloe turned it in again for the fourth goal.

It was a hat-trick on the afternoon for the former Ghana youth international.

After the break, Medeama stepped up and were immediately awarded a penalty which was converted by striker Abass Mohammed.

Two minutes into the second half, the Mauve and Yellows won a free kick close to the box and midfielder Rashid Nortey fired past goalkeeper Ferdinand Sabi Acquah.

Then Nortey struck from range to beat goalkeeper Acquah again to make it 4-3 now in a surprise comeback.

Sixth minute from time, WAFA managed to score another through Agloe to make it 5-3 and when everybody thought it was game over, Justice Blay pulled the trigger with a thunderbolt.