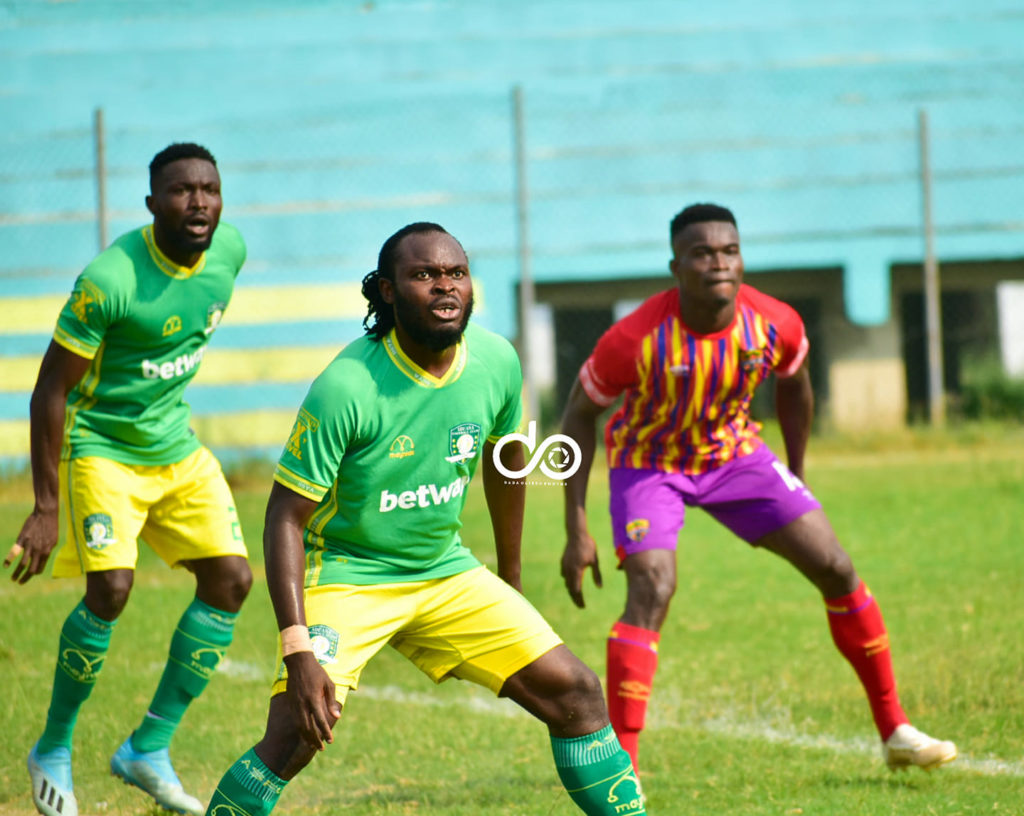 Aduana Stars forward Yahaya Mohammed delivered on his promise and scored against Hearts of Oak at the Nana Agyeman Badu Park in this outstanding fixture of the 2020/21 Ghana Premier League.

The Dormaa-based side recorded a 2-0 win over The Phobians in this fixture.

Aduana Stars were awarded a referee kick early in the opening minutes but they failed to make it count.

Hearts had a chance at goal in the eighth minute as Unaf Manaf sent a through pass to Patrick Razak but the Aduana Stars defenders were quick to react as they cleared the ball off the line.

Hearts left-back Randy Ovoka had his shot on target in the 10th minute but his effort was saved by the Aduana Stars goalkeeper Joseph Addo with Hearts getting a corner kick.

Hearts of Oak-dominated proceedings in the first 15 minutes of the game but were unable to score from the chances created.

In the 27th minute, Patrick Razak failed to assist Kwadwo Obeng Junior to score as he robbed Hearts off an opportunity.

Charles Kamara for Aduana Stars was shown the first yellow card of the game in the 32nd minute after a dangerous tackle on the Hearts player.

Charles Gyamfi missed a glorious chance to break the deadlock for Aduana Stars as his effort went off-target.

The 34-year old broke the deadlock in the 44th minute following a deflection inside the Hearts goal area as he struck the ball into the right corner of the post.

After recess, Prince Acquah scored from 45 yards to increase the lead for the home side in the 48th minute.

His goal a contender for goal of the season.

Hearts coach Kosta Papic made some changes to his side after conceding the second goal. The Phobians were able to come into the game after the changes but were unable to get a shot on target.

Randy Ovuka failed to get a consolation for the Phobians late in the game as his penalty was saved by the Joseph Addo.

The Phobians had another opportunity at goal after the penalty but his effort went wide.

Aduana Stars recorded their first win of the season after this win while Hearts Coach Kosta Papic tastes his first defeat in the ongoing Ghana Premier League.