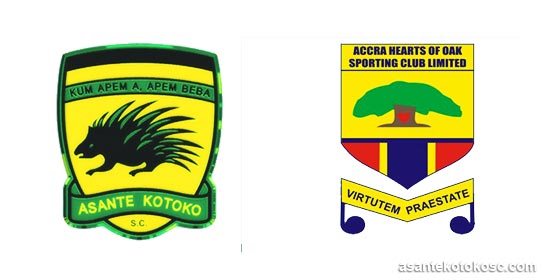 Asante Kotoko are in form and will be playing at their de facto home ground against Hearts of Oak on Sunday, 28 February 2021, in the Ghana Premier League derby.

The week 14 fixture had to be postponed due to Kotoko's Africa campaign where they travelled to Algeria to face ES Setif in the Confederation Cup.

The Porcupine Warriors have gone seven matches without defeat in the league and have really come on in leaps and bounds under Johnson Smith.

If they replicate the performance which earned them a 0-0 draw at Setif at the weekend, then Kotoko cannot be unlocked.

Striker Kwame Opoku- who claimed in an interview this week that he supported Hearts of Oak as a youngster, is expecting to put aside his emotions and get the job done.

Goalkeeper Razak Abalora has been a real force between the sticks and Hearts must dig deep to get past the Ghana international.

Hearts of oak are without a substantive coach by stop-gap coach Nii Noi has a 100% winning record.

He beat Ebusua Dwarfs with a narrow scoreline and against Liberty Professionals on the road.

The Phobians have signed Salifu Ibrahim from Eleven Wonders and he could be handed his debut after completing his transfer.

Ibrahim trained with Hearts of Oak on Saturday.