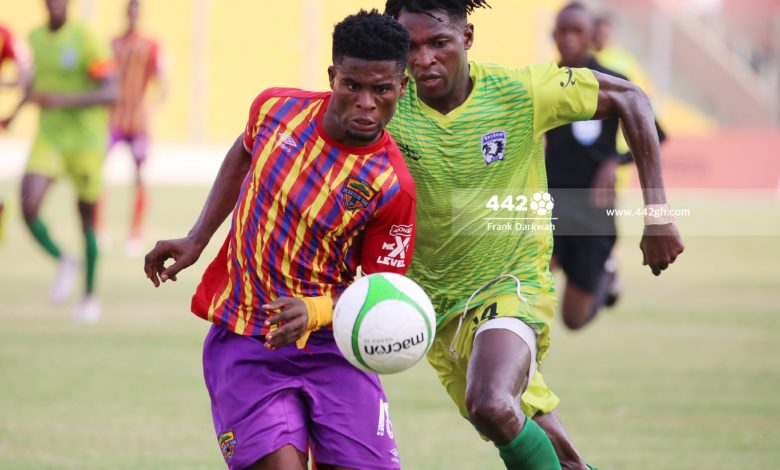 Bechem United face a stern test at the Nana Fosu Gyeabour Park on Wednesday when they host Hearts of Oak in a matchday 24 fixture of the Ghana Premier League.

The Hunters suffered a humiliation in the reverse fixture in the first round where they were hammered 6-1 at the Accra Sports Stadium.

They go into this game to seek for a revenge with at least a victory on Wednesday against the Phobians.

Bechem will have to do this without captain Moro Salifu who has been instrumental this campaign especially when they are at home.

The lanky midfielder was sent off last Sunday in their 2-1 defeat to Karela United FC.

Coach Kasim Ocansey Mingle will have his central defender Charles Amponsah Bosompem back from suspension to face Hearts on Wednesday.

Bechem are the second best team at home in the premiership this season having managed 8 wins with 4 draws from 12 matches at the Nana Fosu Gyeabour Park.

Hearts of Oak recovered from their defeat to Dreams FC a fortnight ago on Sunday when they beat King Faisal Babes 2-0 at the Accra Sports Stadium to keep their title hopes alive.

Goals from Kojo Obeng Junior and Daniel Afriyie Barnieh were enough for the Phobians to see off the Kumasi based club.

Hearts are presently lying at the 4th place on the premiership table with 37 points after 23 rounds. They are only four points behind leaders and rivals Asante Kotoko SC.

The Rainbow club have managed just one win out of eight games on the road in the league since the beginning of the year 2021.

They have not recorded an away win in the league since beating Liberty Professionals on 24 February 2021.

Hearts have failed to pick at least one point from their last three visits to the Nana Fosu Gyeabour Park as they have lost all of them.

The only time the Phobians beat the Hunters in Bechem was 10 May 2013 where they recorded a 1-0 win.

Central defender Nuru Sulley didn't travel with the team despite being available for selection after serving his suspension last Sunday.