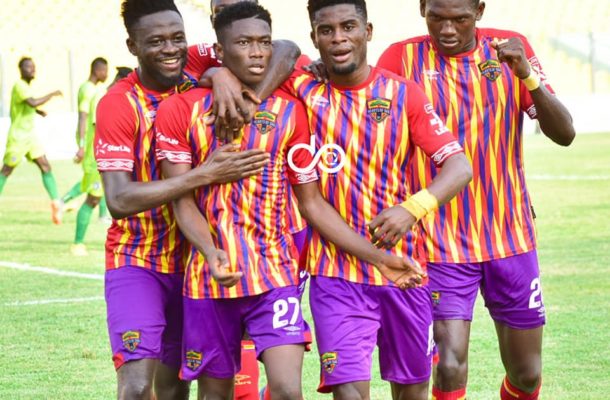 Bechem United saw their home invincibility come to an end on Wednesday when they suffered a narrow defeat in the hands of giants Hearts of Oak in matchday 24 of the Ghana league.

The Hunters were beaten 1-0 at the Nana Fosu Gyeabour Park by the Phobians who have moved just a point behind leaders Asante Kotoko SC on the league standings.

Central defender Kofi Agbesimah led the team as captain to face the Phobians in the absence of Salifu.

Hearts gaffer Samuel Boadu made only one alteration to the squad that beat King Faisal Babes 2-0 last Sunday at the Accra Sports Stadium.

Caleb Amankwah was brought in the starting lineup in place of Victor Aidoo while Richard Attah and Raddy Ovouka Hokemba maintained their respective positions.

Michelle Sarpong replaced Benjamin Afutu Kotey in the starting lineup with Emmanuel Nettey also starting for the second time in a row.

The first half was virtually unexciting as both sides failed to create scoring opportunities with a very cautious play.

Salifu Ibrahim scored the match winner in the 74th minute to ensure the Phobians claim all three points of the match.

Bechem fought back to get the equalizer but Hearts goalkeeper Attah could not give them the room.

Ibrahim was named man of the match for the second time in a row in the Rainbow shirt and that's his seventh award in the entire season.

It is the Phobians first win over Bechem at the Nana Fosu Gyeabour Park since 2013.