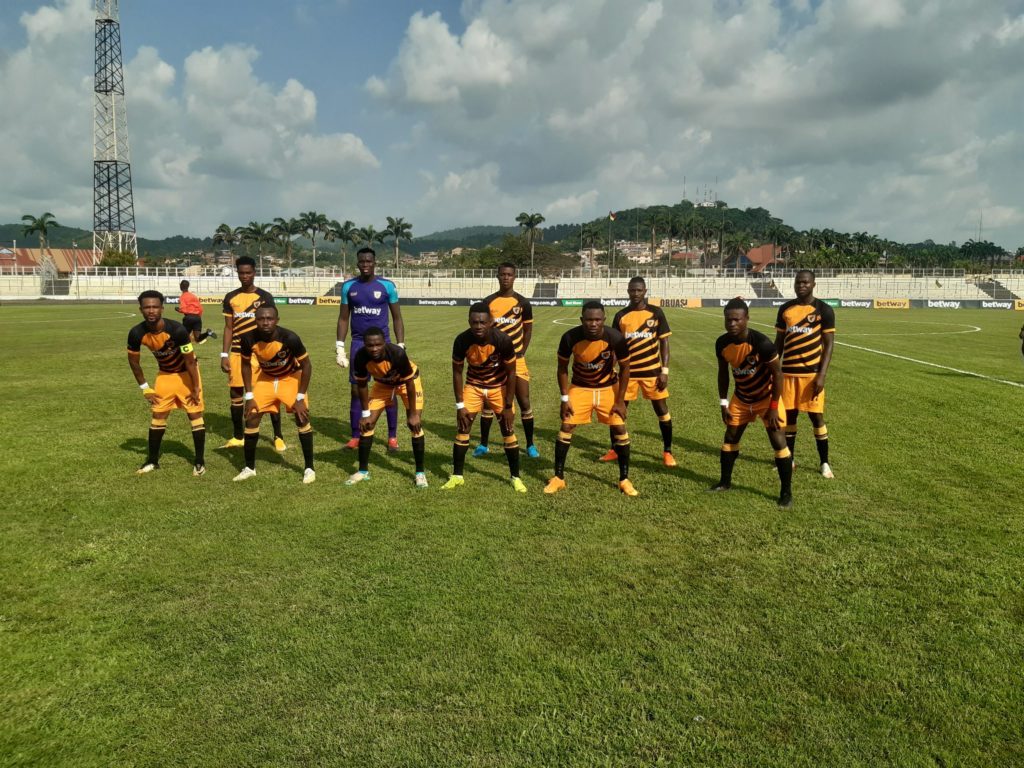 AshantiGold SC recorded their second victory of the season with an emphatic 5-1 thrashing of King Faisal Babes at the Len Clay Stadium on Wednesday.

20-year-old striker Isaac Opoku Agyemang who was making his debut for the Miners scored a brace and also assisted another goal to ensure the massive win.

Milovan Cirkovic made five changes to his squad that defeated Elmina Sharks 4-2 on the weekend.

Opoku Agyemang was handed his very first start in the Gold and Black colours as he replaced Mark Agyekum.

Slavisa Bozicic made just one alteration to the team that suffered a 2-0 loss to Karela United last weekend.

Razak Toufiq took the place of Godfred Appiah Danso at left back.

Opoku Agyemang, 20, who was making his debut for AshantiGold netted the opener in the 16th minute as he connected a pass from Abagna following a beautiful team play.

King Faisal pulled parity in the 27th minute after Kwame Peprah pounced on a blunder by defender Abdul Bashiru to slot in.

Yuisu produced a spectacular save to deny the hosts the 3rd goal in the 38th minute.

The visitors had the opportunity to draw level after Peprah was brought down inside the box resulting in a penalty.

Peprah stepped up but blasted the spot kick over the crossbar.

AshantiGold increased their advantage three minutes into the second half with a brilliant finish from Opoku Agyemang.

Opoku Agyemang nearly got a hat trick on his debut but his goal in the 63rd minute was ruled out for a foul on goalkeeper Yuisu.

Yaw Annor scored his debut goal seven minutes from time to increase the tally for the home side.

Annor put a icing on the cake with his second goal of the day for the Miners after pouncing on a rebound following goalkeeper Yuisu's failure to save Appiah McCarthy's free-kick.

AshantiGold travel to Techiman to face Eleven Wonders FC this weekend whereas King Faisal will be at same venue to tackle Hearts of Oak.