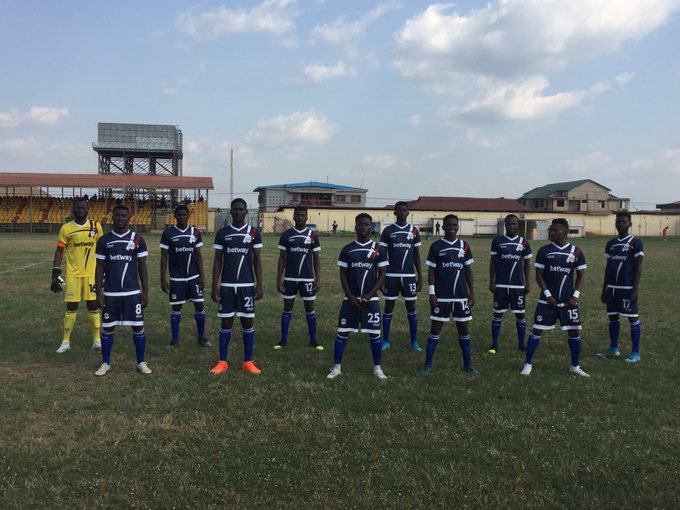 Liberty Professionals youngster Simon Appiah bagged a brace to help his side to their first win of the campaign with victory over ten men Great Olympics at the Carl Reindorf Park.

The sensational striker netted at each side of half time in a highly entertaining encounter in Dansoman.

Great Olympics had the first chance of the match just five minutes into the game but failed to capitalize as the Liberty Professionals regrouped quickly.

Few minutes later it was the Dansoman based side that came close through tricky attacker Abraham Wayo, whose link up play with Simon Appiah has been impeccable on the day.

Halfway through the first half, Abraham Wayo sent in a cross which was perfectly met by Simon Appiah to hand Liberty the lead.

Great Olympics were reduced to ten men before the break after Abbry Quaye was shown the marching orders for an offense on Wayo.

Liberty Professionals were given a scare few minutes into the second half after Olympics’ Mudasuri’s effort was cleared off the line by Maxwell Ansah.

The change proved vital as Liberty grabbed the second goal of the day through youngster Simon Appiah, who was netting his second of the match.

With victory almost secured the home side change their approach, sending more players back as they preserve their lead.

Liberty endured a frenetic end to the game to grab their first win of the season with a comfortable victory at the Carl Reindorf Park.