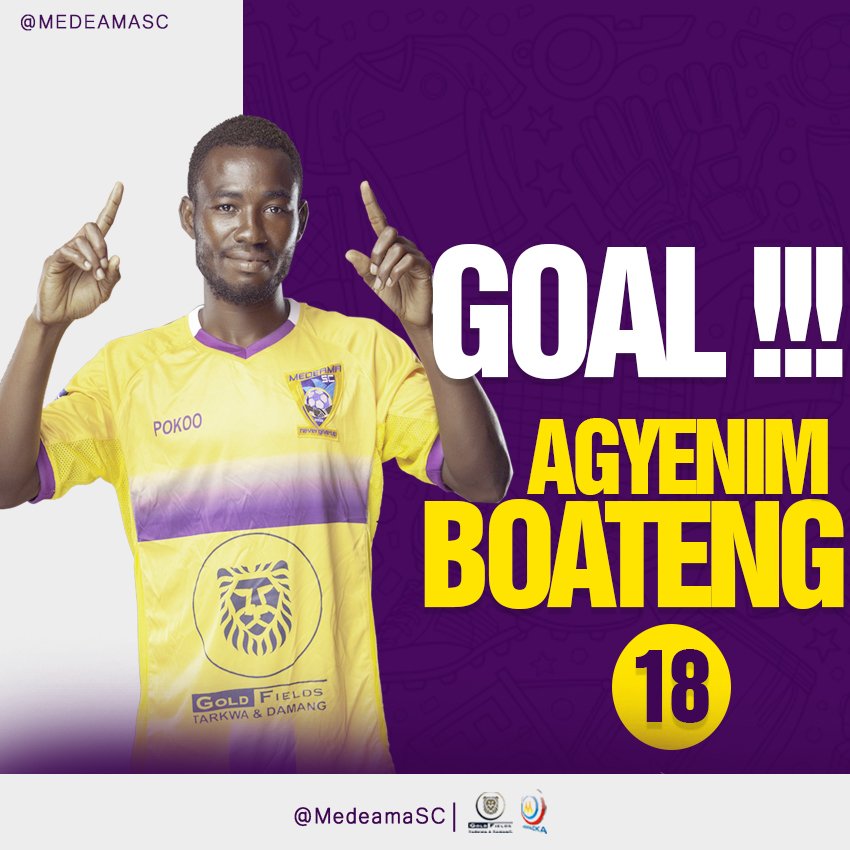 Isaac Agyenim Boateng bagged a sensational brace for Medeama in their 2-1 win over Aduana Stars to record their first home win of the season.

Boateng opened the scoring in the 7th minute with a cool finish inside the box after connecting from Abass Mohammed's flick.

Aduana pulled parity before the first half after Bright Adjei's  miscued shot appears to have been deflected to beat goalkeeper Frank Boateng.

The Mauve and Yellow returned from the break determined to win as they kept the heat on the visitors for the better part of the exchanges.

In one of those ensuing torrent, Agyenim Boateng walked the ball into the back of the net after a sublime build up from the two-time FA Cup winners.

This is a massive boost for Medeama who have been angling for a home win in four matches.

Captain Joseph Tetteh Zutah also enjoyed his start of the season and despite being withdrawn and replaced by Ebenezer Ackhabi in the second half, discharged his duties with aplomb.

Aduana Stars worked hard in search of the equalizer but was too little too late as the home side snatched their first victory at the Akoon Park infront of their home fans.

The visitors probe for the equalizer with striker Yahaya Mohammed and Bright Adjei making several attempts at goal by Frank Boateng was equal to the task.

Medeama will feel they could have scored more after the introduction of youngster Ebenezer Ackahbi - who used his pace and trickery to cause a lot of problems for the two-time Premier League champions.

It's a massive relief for Medeama coach Samuel Boadu, who has come under intense pressure since the start of the season.

Despite being touted as one the huge favourite for the Premier League crown, Medeama have huffed and puffed since the start of the season.

They have now recorded just two wins in 8 matches and travel to Obuasi to face Medeama next weekend.