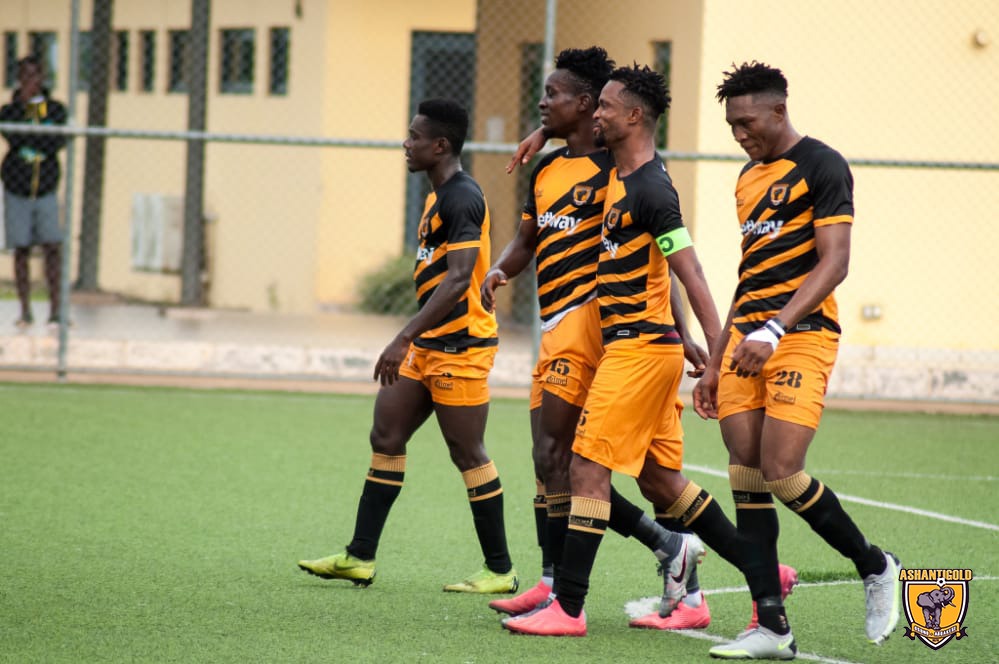 AshantiGold cruised to the final of the 2020/21 MTN Ghana FA Cup after an extra-time goal secured a 4-1 win over a ten-man Berekum Chelsea side on Sunday, 1 August 2021 at the Cape Coast Stadium.

A pair of goals in the first half of extra-time gave he Miners the upper hand after the first half goal was cancelled out by substitute Stephen Sarfo in regulation.

Three minutes to full time, Seth Osei slotted home from close range to seal that big win for the Miners.

But Berekum Chelsea were a decent side and it was striker Kofi Owusu who fired the first warning shot.

He took a bold attempt from the centre circle after spotting goalkeeper Kofi Mensah was off his line but his long range ball went off the line.

After the first quarter, AshantiGold won a free-kick on the left flank which was whipped in  but captain Richard Osei Agyemang's header went over the bar

Berekum Chelsea worked their way into the box with a lovely move but a cross onto the head of Atta-Adjei was wide at the far post.

The Blues came close again but brave goalkeeping save AshGold from conceding .

AshGold came under pressure after a header from Empem Dacosta to cut out a free-kick came off the side post before Kofi Owusu's shot at goal was palmed out by Kofi Mensh on the line.

On the half hour mark, winger Isaac Opoku Agyeman weaved his way on the flank into the box but Stepen Anokye Badu produced a sliding tackle to stop him from pulling the trigger.

In injury time of the first half, AshantiGold jumped into the lead courtesy a superb free-kick from Eric Esso.

The midfielder produced a beautiful curler which zoomed over the wall into the roof with goalkeeper Sammy Adjei completely beaten.

Six minutes into the second half, substitute Stephen Sarfo leveled for Berekum Chelsea.

He controlled a cross from the right inside the box with his chest before slotting past goalkeeper Mensah.

A glorious opportunity fell to Kofi Owusu to double Chelsea's lead but he mis-kicked a knocked down ball from Stephen Amankona.

Amankona nearly put Chelsea ahead on 77 minutes but his low shot was superbly saved by Kofi Mensah.

It was a lovely move from Chelsea  after some sleek passing play.

Esso tried his luck with a free-kick in the 88th minute but this time his effort was a skied one.

Two minutes into extra-time, Amos Nkrumah powerfully struck a rocket into the roof of the net from 25 yards.

Minutes, Chelsea were reduced to ten men when  Benjamin Baidoo was sent off after receiving a second yellow card following a push on Mark Agyekum on the flank.

In added on time of the first half of extra-time, Amos Addai -left unmarked-was released on the right side and he went at goal before dribbling past goalkeeper Adjei to fire home the third.