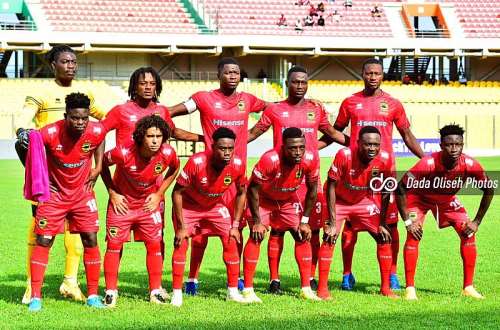 Asante Kotoko were held to a goalless draw by a resilient Eleven Wonders as the Porcupine Warriors remained eight points clear at the top with 13 games to end the season.

Wonders were impressive and it would have been cruel if they lost to the Ghanaian Premier League leaders on home soil.

Kotoko came into the game, having scored five against Bibiani Gold Stars and were absolutely scoring against the relegation-threatened side, but Wonders were tight at the back.

Kotoko coach Dr Prosper Narteh Ogum made changes to the side that beat Gold Stars 5-0 with Kwame Baah starting ahead of Danlad Ibrahim in goal.

Baah was excellent, denying Wonders from taking the lead after saving a goal-bound header.

After that, Wonders had a goal scored by Salifu Moro correctly disallowed for offside before halftime.

Kotoko were better in the second half, with Prince Baffoe, Richmond Lamptey, and Mbella Etouga threatening Wonders’ defence.

Baah came to the rescue of Kotoko again late in the game as he produced a top save much to the dismay of Wonders players and their fans.

Despite the draw, Kotoko maintain their healthy lead at the top. Their next assignment is at home against Karela United.

Wonders are now one point from safety and will be hoping to get three points when they bottom dwellers Elmina Sharks next weekend.