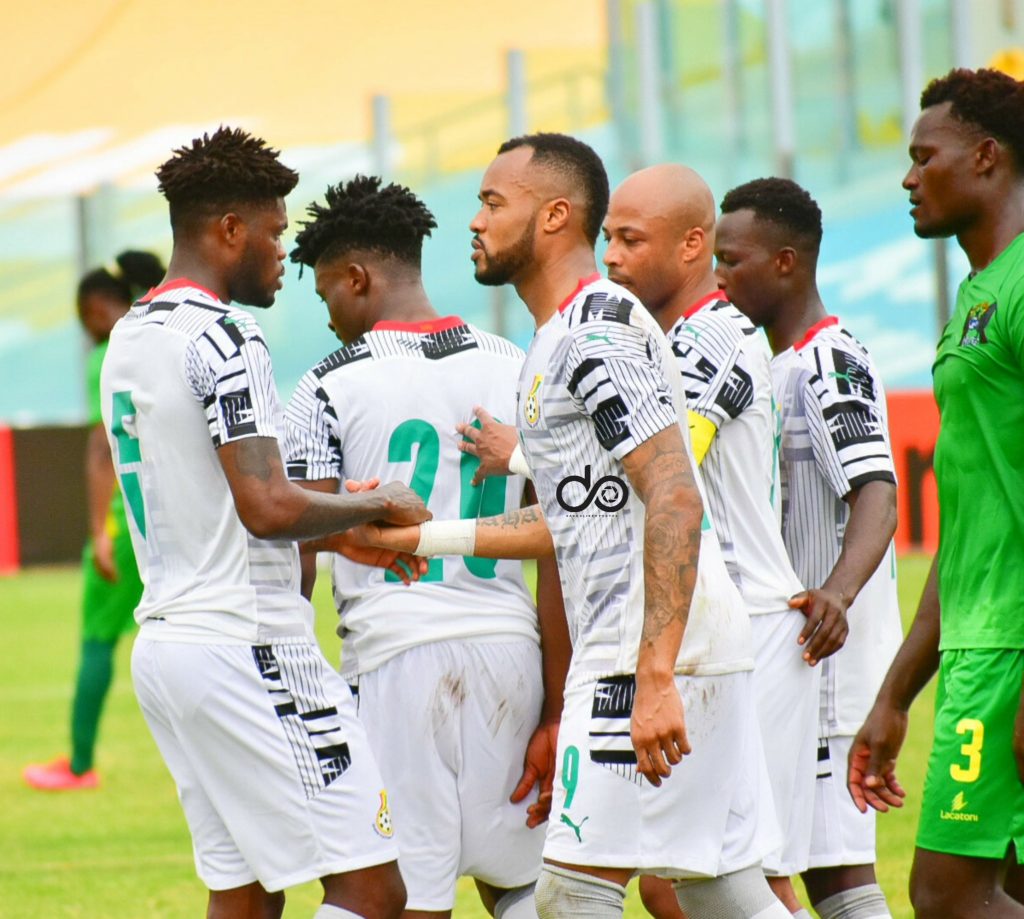 Ghana rounded up their 2021 AFCON qualifiers with a flamboyant performance as they thumped Group C whipping boys São Tomé at the Accra Sports Stadium.

The Black Stars who had captain Andre Ayew, his brother Jordan and Arsenal midfielder Thomas Partey returning to the line up wasted no time in establishing their intent, and could have taken the lead after just two minutes had Partey directed his header from a corner into the net.

The home side enjoyed early possession but it was the visitors who had the first shot on target after Mexican based midfielder Luis Leal Dos Anjos fired a long range freekick which went inches wide.

Ajax ace Mohammed Kudus’ brilliant corner was perfectly met in the air by defender Nicholas Opoku for the opener after 12 minutes.

São Tomé were forced into an early substitution after Rosa Cardosa was replaced by Pires di Mata following an injury he picked.

Moments later Mohammed Kudus sent in another brilliant pass to Jordan Ayew who was fouled in the box for a penalty. The Crystal Palace man calmly placed it in the far right corner with the goalkeeper moving the other way.

Just few minutes to halftime, Kudus Mohammed forced a save from the São Tomé goalie after taking on a defender and unleashing a shot.

Coach C.K Akonnor made a quick change at halftime, bringing on Gladson Awako for Osman Bukari as the Ghanaian team continue to dominate.

Mubarak Wakaso came close to making it three with a long range drive, before Baba Rahman sent in a pass on the left which nearly found Kudus but for the intervention of a São Tomé defender.

The resulting corner saw Kudus blister his way into the box to find Rahman who fired home the third on the hour mark.

The gaffer then made two quick changes, replacing the goalscorers Rahman and Jordan with Ibrahim Imoro and Kwesi Okyere Wreidt respectively.

A mistake by goalkeeper Razak Abalora after receiving a back pass from Imoro saw the visitors pull one back through Fernandez Calvaho.

Kwesi Wreidt nearly made it four but his effort from outside the box went narrowly wide.

Justice Blay replace Wakaso with the clock ticking down, and Wreidt saw a final minute effort saved followed by an Andre Ayew strike which was blocked.

Ghana finished the group top of the table with 13 points.