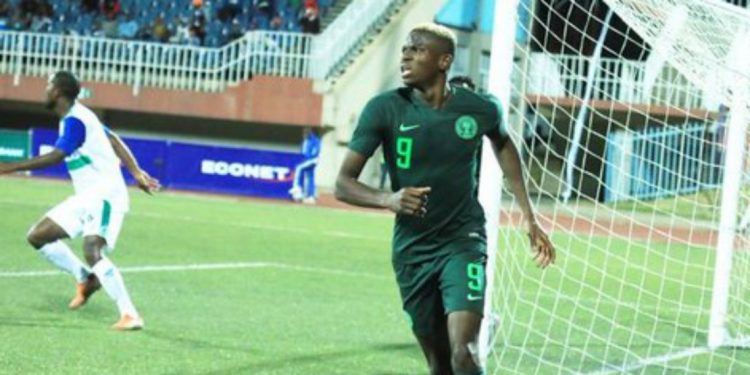 Nigeria's rising star Victor Osimhen scored twice as the Super Eagles claimed an easy 4-2 away win over Lesotho in the 2021 Nations Cup qualifiers on Sunday.

Masoabi Nkoto netted an early goal for the hosts after 11 minutes but Alex Iwobi leveled the score 15 minutes later.

Samuel Chukwueze made it 2-1 for Nigeria and Osimhen ensured the win with two goals in the 75 and 85 minutes. Nigeria defender Chidozie Awaziem scored in his own net in injury time.

Nigeria, who defeated Benin 2-1 in Group L opener, are on top of the group with maximum six points, three ahead of second-placed Benin who beat Sierra Leone 1-0 earlier in the day.

Meanwhile, Cameroon, who will qualify for the Nations Cup as hosts regardless of their results in the group, returned to winning ways after claiming a 1-0 away win over Rwanda, thanks to a 71st-minute strike from Nicolas Ngamaleu.

The Indomitable Lions were held to 0-0 draw at home to Cape Verde on Wednesday.

In Group I, Congo outclassed Guinea Bissau 3-0 to move to second in the group behind leaders Senegal, who bagged a maximum six points.

In Group A, Guinea defeated Namibia 2-0 to climb to the summit with four points, on level with Mali who beat Chad 2-0 earlier in the day.