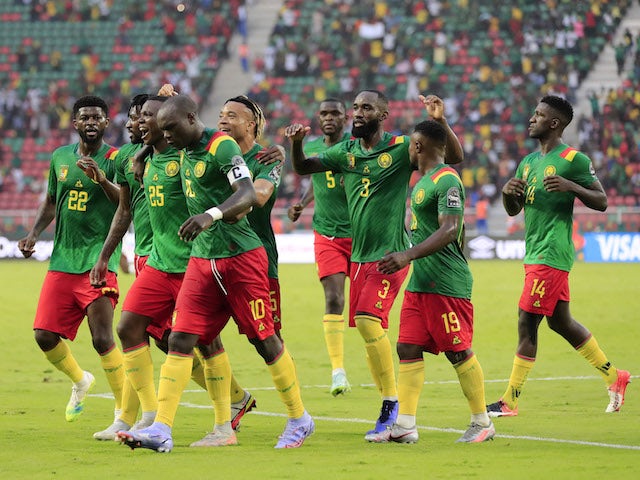 With the knockout stages of the Africa Cup of Nations now in full swing, host nation Cameroon take on debutants Comoros at the Paul Biya Stadium for a place in the quarter-final on Monday.

The Indomitable Lions have enjoyed an unbeaten campaign so far, finishing top in Group A, while Comoros stunned Ghana in a thrilling group finale to progress to the next phase of the tournament.

With the home crowd roaring them on, Cameroon will head into the knockout stages with real belief and confidence in their chances of going all the way in this year's Africa Cup of Nations following an impressive group-stage run.

After losing just one game in the qualifiers, the Indomitable Lions got the 33rd edition of the continental tournament underway on January 9, when they came from behind to claim a 2-1 victory over Burkina Faso.

This was followed by a dominant 4-1 victory over Ethiopia four days later, when Vincent Aboubakar struck twice in the second half to inspire another comeback win before wrapping things up in the group stages with a 1-1 draw with Cape Verde last time out.

In that encounter, the Cameroonians opened the scoring for the first time in the tournament in the 39th minute through Aboubakar before Garry Rodrigues struck eight minutes after the half-time break to force a share of the spoils and send Cape Verde through to the last 16.

Now heading into the round of 16, Toni Conceicao's men could not have wished for a better draw and will be licking their lips as they go up against an inexperienced Comoros side who are making their first appearance at the tournament.

Cameroon, who have conquered the continent on five occasions, including their last title win in 2017 when they claimed a 2-1 victory over Egypt in the final, are now unbeaten in each of their last seven games in all competitions, claiming six wins and one draw since September's 2-1 loss to Ivory Coast.

However, there have been several surprising results at the tournament, including Comoros' 3-2 victory over Ghana in Tuesday's final Group C showdown which ensured their passage to the knockout stages as one of the four best third-placed sides.

After El Fardou Ben and Ahmed Mogni put the newcomers into a commanding two-goal lead, Richmond Boakye and Alexander Djiku struck in a 13-minute spell to restore parity but Mogni was at it again as he grabbed his second of the game with five minutes left to play to send the Black Stars packing.

Prior to that, Amir Abdou's side kicked off their campaign with a 1-0 defeat at the hands of Gabon on January 10, before falling to a 2-0 loss against Morocco in their second group outing four days later.

With three points from three games, the Coelacanth finished third in Group C, two points above rock-bottom Ghana and two below Gabon to make history and qualify for the knockout stages as one of the four best third-placed nations.

On the back of their victory over the Black Stars, Comoros, who have won just one of their last six competitive games, will now look to cause another upset and continue their fairy-tale ride at the tournament.