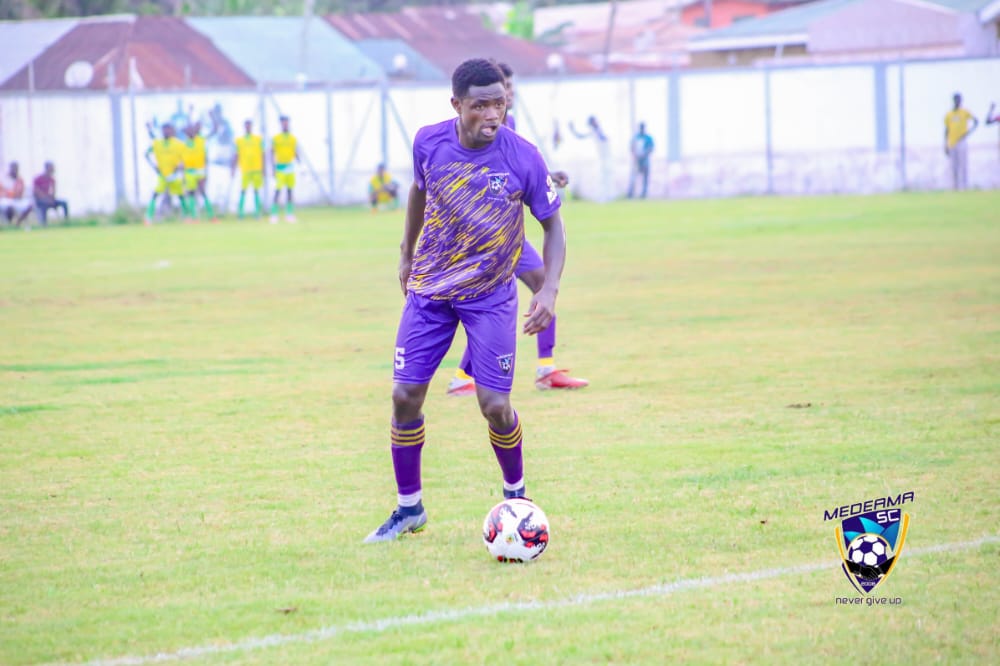 Prosper Boakye Owusu is on fire in Tarkwa
Share

Midfield star Prosper Boakye Owusu climbed off the bench to score in injury time for Medeama in their hard-fought 1-0 win over Kotoku Royals.

Boakye replaced midfielder Rashid Nortey - who returned to the starting XI for the first time in three games.

Boakye, who joined the senior side from the club's developmental squad last season, has been a revelation - churning out impressive performances week-in and week-out.

Medeama dominated the game from the blast of the whistle and spurned several chances with veteran strike Hans Kwoffie the biggest culprit.

Kwoffie missed several golden opportunities as the Mauve and Yellows laboured to a 1-0 success over the visitors.

Assistant coach Umar Rabi made two changes to the squad that managed a 1-1 stalemate at Bibiani Gold Stars on Wednesday.

Vincent Atingah and Nurudeen Abdulai paired at the back for the second successive match - leaving in-form Baba Musah Abdulai surprisingly on the bench.

Ivorian Jean Vital Ourega started for the second time in a row, combining with captain Kwasi Donsu and Rashid Nortey at the heart of the park.

Kotoku Royals will feel downhearted after putting an impressive defensive display in the mining town of Tarkwa.

It was a deja vu for former Medeama technical director Seth Ablade, who was aiming to bag at least a point on his return to Tarkwa.

But his charges tried but could not hold onto the thumping header of highly-rated Prosper Owusu Boakye Owusu- who stole the show with a last gasp winner.

Medeama have now amassed four points from a possible six from games- ending a streak of four successive defeats in the top-flight.

The Tarwa-based side had lost to Berekum Chelsea, Aduana, Great Olympics and Asante Kotoko before drawing 1-1 at Bibiani Gold Stars at the Duns Park.

Medeama are now 12th on the table with Kotoku Royals languishing at the bottom as the Ghana Premier League head on a break due to the 2022 FIFA World Cup which gets underway in Qatar on Sunday November 20.