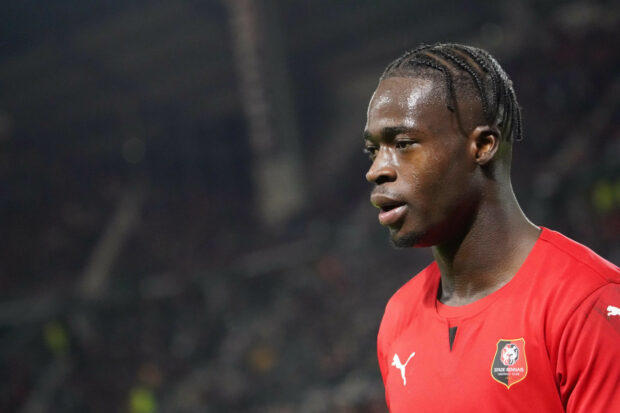 Kamaldeen SULEMANA of Rennes during the UEFA Europa Conference League

Ghana winger Kamaldeen Sulemana is expected to make a return to action for Stade Rennais tonight after making an injury comeback this week.

He joined his teammates in training and manager Bruno Genesio confirmed he is available for the game against Marseille on Saturday evening.

"For the first time since the start of the season, we are complete, with Loïc Badé and Kamaldeen Sulemana. Jérémy Gélin is also one of the players who trained with the group this week," said Genesio ahead of their final home game for the season.

The talented winger has been out since February with a back injury but trained the whole of this week and will play a pivotal role in Rennais end to the season with top four finish in sight.

His return is also a major boost for the national team of Ghana ahead of the AFCON qualifiers and the 2022 World Cup later this year.

The 20-year-old missed the World Cup playoff in March against Nigeria due to injury.

He moved to Rennes from the Danish side NordDsjallaend for an undisclosed fee of €20 million.

He hit the ground running right away, scoring a spectacular goal against Lens. Sulemana went on to achieve three more goals and add two assists, finishing the first round as one of the team's best players.

However, he has not enjoyed the second round due to the injury.

Sulemana was a member of the Black Stars squad that was eliminated from the Africa Cup of Nations group stage earlier this year.

He did not, however, make the squad that defeated Nigeria to secure World Cup qualification because he was injured.